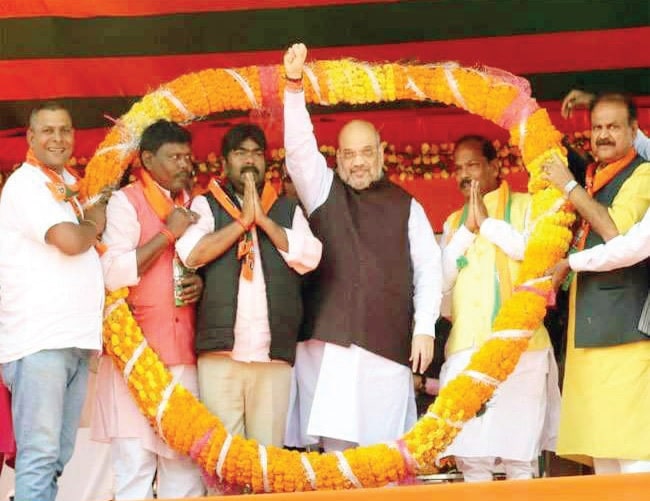 Latehar: Kickstarting the election campaign of the BJP in Jharkhand national president and Union Home Minister Amit Shah tried to woo the Other Backward Castes in the state by claiming that the party was working on a scheme to provide more reservation to the backward.

Addressing an election rally at High School Ground in Manika here he said that for the last 70 years the Congress did not honour the OBCs and it was the government of Prime Minister Narendra Modi who provided constitutional recognition to the OBC commission. He said that it is the BJP which removed the article 370 and 35 A and also closed the gateway of the terrorists in the country.

Raising the Ram Mandir issue he said that everyone wanted the Ram Mandir to be constructed in Ayodhya apart from the Congress and recently the Supreme Court through its verdict has clear the way for construction of the temple.

Mr Shah said that one after another all major problems of the country is being solved by the Modi Government.

Attacking the Congress party he said that till Congress was in power the separate state of Jharkhand was not created, the state only came into existence after Atal Ji came into power.

He said that the martyrs had laid down their lives so that Jharkhand could become literate and prosperous but in the previous 14 years in which the BJP and the Congress both ruled the state political stability was missing and the people did not get the advantage of the mineral wealth of the state.

He said that the Congress and the JMM who now talk about the poor tribal and backward should tell why they did not provide homes, power, gas, health card, toilets and employment to those people.

He said that the development of Jharkhand was now taking place which is also being witnessed by all where as for 70 years the Congress had only done injustice with the community.

Taking swipe at the Congress-JMM alliance in the state he said that Hemant Soren is taking about the tribals but with whom has he joined hands and sought answers from Congress regarding what it has done for the tribals.

Adding further Mr Shah said that in every tribal block an Eklavya school is being constructed while MSP on more than 50 forest produce has been announced. He credited the state government for making the state free from naxalism due to which basic amenities of life has reached to the people.

Mr Shah said that in the 13th finance commission under UPA Jharkhand got Rs 55,255 crore for development whereas under Modi rule in five years the state was given Rs 3.08 lakh crore.