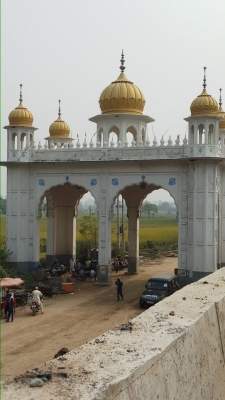 Wearing a scarf, Modi spent time at the Gurdwara Ber Sahib located along the banks of the holy 'Bein', which is connected with many events in the life of the founder of Sikhism Guru Nanak Dev, whose 550th 'Prakash Purb' (birth anniversary) falls on November 12.

The Prime Minister flew into Sultanpur Lodhi in a helicopter from the Amritsar airport.

The Shriomani Gurdwara Parbandhak Committee (SGPC), which has control over Sikh religious affairs, manages gurdwaras (Sikh temples) in Punjab, Haryana and Himachal Pradesh, including the holiest of Sikh shrines Harmandir Sahib, popularly known as Golden Temple in Amritsar, presented a 'siropa' (robe of honour) to Modi.

One of the main wishes of the pilgrims arriving in the historical Sultanpur Lodhi have been to take a dip in the 'Bein'.

To fulfil the wish, the Punjab government has spent Rs 4.96 crore on the development of the Bein and made arrangements for the pilgrims to take a dip without any hassle.

The pilgrims take a dip in the Bein before paying obeisance at the Gurdwara Ber Sahib.

From the Gurdwara Shri Sant Ghat to Busowal curve, the 4-km stretch of the Bein, has undergone transformation and several "ghats" have been developed.

Around 500 cusecs water is being released from the Mukerian Hydel Project to give a fresh lifeline to the ecology of the Bein.

The government has spent Rs 4.96 crore on the lining of the holy river's banks before releasing water in the Bein. A separate enclosure for the "shnaan" of women pilgrims has also been prepared.

For the benefit of pilgrims, two high-level bridges have also been constructed. The pilgrims are using these bridges for reaching the Bein and to pay obeisance at Gurdwara Ber Sahib.