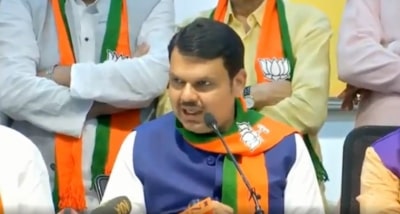 Mumbai (IANS) In a statement likely to aggravate the delicate Shiv Sena-BJP relationship further, BJP's CM face Devendra Fadnavis has asserted he will remain Chief Minister for the next 5 years.

Dismissing claims by Shiv Sena of a 50-50 agreement, Fadnavis told reporters, "I assure you that this will be a BJP-led government. The Shiv Sena was not promised CM's post for two-and-a-half years when the alliance was formalised before the Lok Sabha polls."

The Shiv Sena meanwhile, has demanded a written assurance that the CM post will be given to them for 2.5 years.

Fadnavis's statement comes in the backdrop of a no-filter attack on BJP by Sanjay Raut. He said on Tuesday, "There's no Dushyant Chautala here whose father is in jail. We do politics of truth in Maharashtra. if someone tries to keep us away from power, it's not called politics of truth. We are seeing what's happening and how low people can stoop."

It was a clear reference to the way BJP cobbled up a government in Haryana where it fell six short of the magic number, but formed the government with Dushyant Chautala's help whose JJP ran an election campaign on Jat consolidation and anti-BJP rhetoric.

Chautala senior who is convicted of corruption and lodged in Tihar was released on a 14-day furlough a day after BJP chief Amit Shah and Dushyant announced their deal in Delhi, sitting on the sprawling lawns of the BJP's president's residence.

Congress state President Balasaheb Thorat told mediaperson, "We have not received any communication from the Sena on this yet. However, if it comes, we shall put it up with the party leadership for a decision in the matter". The NCP too wooed the Sena, making them further emboldened.

But Fadnavis' assertion has only complicated the matter for the two saffron parties.