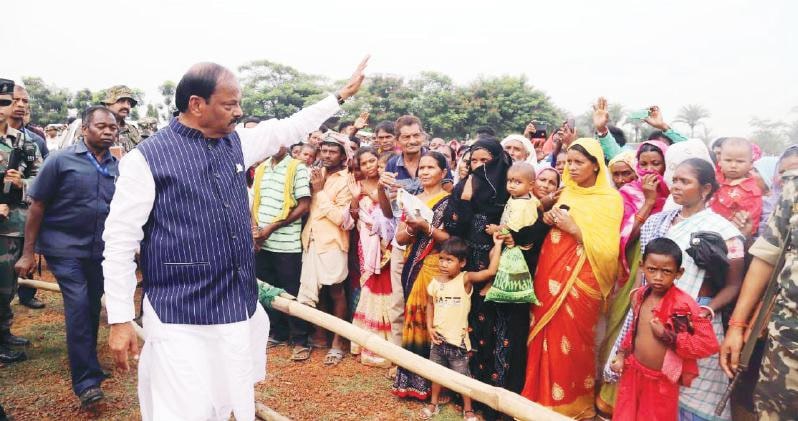 Dumka: Chief Minister Raghubar Das once again aimed his guns at the Jharkhand Mukti Morcha and said that since the party had lost ground in the Santhal Pargana region, therefore, leader of opposition Hemant Soren has become frustrated and was making baseless allegations to mislead the people.

Talking to the reporters at the Rajbhawan here he said that he was a bigger Jharkhandi than Hemant Soren as he was born in the hospital of Tatas in Jamshedpur. He said that the JMM which claims to be a champion for the tribals of the state has only misled them in the last 14 years.

The party along with Congress could not solve any problems of the tribals and the poor he added. He claimed that nine regional languages were not included as part of government jobs or in the studies while on the other hand his government on the demand of the tribal youth has included 9 tribal languages in the JPSC and has also approved that these should be included in the examination conducted by the State Staff Selection Commission.

He said that it was his government which has ensured that in all the schools of the Santhal Pargana the Santhali language is taught and teachers for the same has been also appointed.

Mr Das said that the Johar Jan Aashirwad Yatra carried out by the party has received tremendous response from the people especially from the women and the youth on the basis of which there was no doubt that the party would easily surpass its target of getting more than 65 plus seats in the Vidhan Sabha elections.

He said that those who believe in dividing the community will not be able to open their accounts as people will only vote for the politics of development in the state.

Previous ArticleBadlao Maharally: Hemant says people fed up with government
Next Article '1984 Sikh Genocide Memorial' in US removed after India protests
Must Read