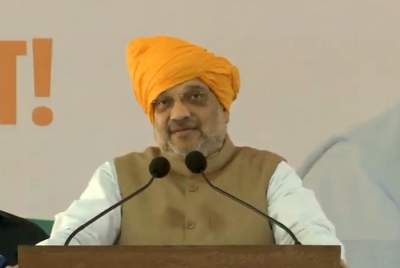 Buldhana (Maharashtra) (IANS) Union Home Minister and Bharatiya Janata Party President Amit Shah on Friday here in Maharashtra again emphasized that Jammu and Kashmir are an integral part of India even as Prime Minister Narendra Modi was set to meet in Tamil Nadu Chinese President Xi Jinping, who has continued to show tacit support to Pakistan on the Kashmir issue.

"For BJP, the nation is always a prioritya We are an ideology-based party, not family-dominated like the Congress-Nationalist Congress Party which indulge in vote-bank politics," Shah said, addressing an election rally in Chikhali, Buldhana district of Vidarbha.

Terming the developments in Jammu & Kashmir as significant for Maharashtra, he said that thousands were killed by terrorists there, but the Congress-NCP opposed the abrogation of Article 370.

Lauding Chief Minister Devendra Fadnavis for the all-round development and progress achieved in all sectors in the past five years, Shah urged the people to return the party to power in the state with a full majority in the October 21 elections.

The BJP chief also announced that the world-renowned Lonar Lake, the world's second biggest created by meteorite impact around 60,000 years ago, would be developed into a global tourist hotspot.

Similarly, the temple of the revered saint, Sant Gajanan Maharaj here would also be redeveloped with all amenities for the pilgrims.

On the second day of his whirlwind election tour, the BJP chief is scheduled to address rallies in Washim and Amravati district later in the day.