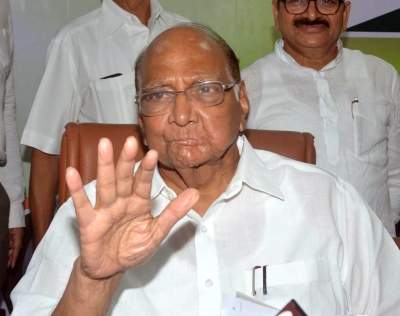 "I have taken the decision not to go there (ED office) in view of the potential law and order problem it could create and cause inconvenience to the general public. I will decide when to go again at an appropriate date," Pawar told a huge posse of mediapersons gathered outside his house here.

The 78-year-old veteran leader described the ED case against him as "politically motivated" since he was not involved as a director of the Maharashtra State Cooperative Bank where the alleged Rs 25,000-crore scam took place.

Pawar also thanked Congress leader Rahul Gandhi and others, ruling ally Shiv Sena and leaders from all other parties for the support extended to him.

He was flanked by the top NCP leadership, besides representatives of allies like Congress, Samajwadi Party, Swabhimani Shetkari Sanghatana and others on the occasion.

Pawar said that now the ED plan was cancelled, he would go on a tour of the flood-affected areas of his home district Pune and surroundings where at least 21 persons were killed on Thursday.

Earlier, Barve rushed to meet Pawar and urged him not to violate the prohibitory orders clamped there since Thursday night in anticipation of a law and order problem, NCP National Secretary Jitendra Awhad said.

Rattled by the NCP chief's move, the ED also dashed off a letter to Pawar requesting him not to come to its office.

The ED and police chief's measures came after other senior police officials, including Joint Police Commissioner V.K. Choubey met Pawar to dissuade him from going to the ED office, apprehending a potential law and order crisis.

Since last night, the south Mumbai area was converted into a veritable fortress with a huge police presence of over 1,500 personnel, restrictions, road blocks and prohibitory orders, but the situation relaxed later this afternoon.

"Even the NCP officials and workers were not allowed to enter the party office which is located in the Ballard Pier vicinity," said Mumbai party chief Nawab Malik.