Pak to remain challenge till it addresses terror 'successfully': Jaishankar 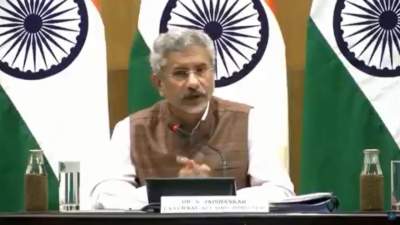 New Delhi (IANS) India on Tuesday made it clear that Pakistan will remain a "unique challenge" until it "successfully" addresses the problem of cross-border terrorism and "becomes a normal neighbour".

Giving a gist of the work done by the External Affairs Ministry since May 30, he said there is a linkage to what the government does domestically and internationally.

He said a major difference is that the co-relation between the national security goals and foreign policy goals has become stronger.

In these 100 days, there has been a message of change against the backdrop of strong vote of confidence for the Modi government from the electorate, Jaishankar said.

He said certain issues like changes in Article 370 and cross-border terrorism also have resonance in the foreign policy.

Talking about the neighbourhood, the External Affairs Minister said it remains the first priority of India and entails connectivity, commerce and contacts.

He noted that the Prime Minister Narendra Modi began his second term with a visit to Maldives, followed by Sri Lanka and then Bhutan.

India's policy is going to be generous and non-reciprocal, with emphasis on business and people-to-people contact, Jaishankar said.

Talking about Pakistan in a veiled manner, he said this neighbour will remain a "unique challenge" until cross-border terrorism is "successfully addressed" and "until that neighbour becomes a normal neighbour".

Previous ArticleWanted Maoist arrested in Chatra
Next Article Oil Cos. maintain check, petrol-diesel prices may not spike
Must Read