India, China together will make difference to Asia: Chinese envoy on India visit 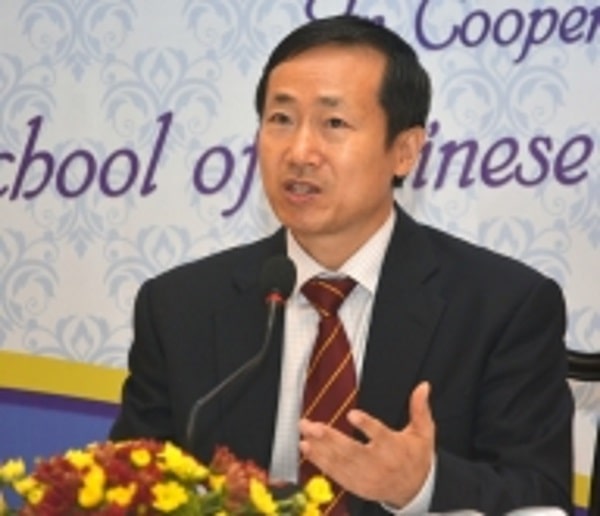 Kolkata (IANS) China and India together would make a difference to Asia and the whole world, a top Chinese envoy said here, stressing that leaders of the two nations favour meaningful cultural and educational exchanges to enhance bilateral cooperation.

Noting that the leaders would meet towards the year-end to discuss on further developing the cultural, educational and other artistic exchanges, Chinese Consul General in Kolkata Ma Zhanwu said collaboration in events like Durga Puja would contribute to the friendship.

Zhanwu expressed joy over the Consulate joining hands with the BJ Block community Durga Puja in the post-satellite township of Salt Lake here.

"Towards the end of this year, leaders from China and India will meet to discuss how to further develop the cultural, educational and other artistic exchanges between our two nations. Such an even as tonight will be remembered and will contribute to the friendship, the economic and cultural exchanges and cooperation between two great nations.

"Together we will make a difference for Asia and whole of the world," Zhanwu said on Saturday at the BJ Block Durga Puja venue ahead of the marquee's inauguration by West Bengal Governor Keshari Nath Tripathi.

Talking about the views of the leaders, he said: "We are also very happy that (Chinese) President Xi Jinping and (Indian) Prime Minister (Narendra) Modi met several times this year to decide what to do to develop the bilateral relationship.

"And they have decided that the two great nations must work together to promote exchanges, co-operation. The two leaders believe that the cultural exchanges, educational exchanges are very important."

The Puja marquee has recreated a slice of authentic China.

Based on Chinese architecture, the marquee has a 20 feet-structure of Chinese 'Hulu' (bottle gourd) in its premises which signifies happiness and prosperity in China's Yunnan province.

"Around five Bengali artists went to China. They took pictures, videos and they did it all by themselves. Then they showed me the structures and I think they have done a wonderful job," he said.

Pointing towards the marquee, Zhanwu said the red lanterns, the paintings, dragons and especially the 'Hulu', represent affluence, happiness, prosperity for Chinese people.

Around 40 artists from China presented Peacock dance, music and martial arts. Zhanwu himself performed 'Tai Chi' moves while his wife Yang Li played a musical instrument 'Pipa' in front of the huge audience who seemed to enjoy every minute of the cultural programme.

Zhanwu said there would be more such understandings between the two countries in the coming years.

"I am happy that the Chinese people could enjoy and share the joy of Durga Puja. We will have more friendship and understanding between Chinese and Indian people in the coming years.

"More Chinese people will come to visit Kolkata, Salt lake city and Bidhannagar (the locality) will be more known in China. We are looking for building a relationship between Bidhannagar and some city in China," the envoy said.

"The great poet Rabindranath Tagore said when China and India work together we will create a difference to the world. We will change and contribute to the progress of this world. We will have 'Chindia'--the word that Tagore used," he added.