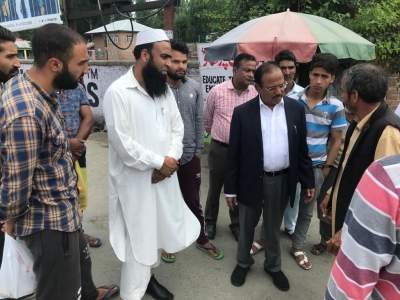 New Delhi (IANS) With National Security Advisor Ajit Doval hitting the straps yet again and meeting common folk in Anantnag on Saturday, the government is preparing to relent on the existing security dragnet for the coming Bakr Id festival on Monday. For Doval personally and the government as a collective, a lot is at stake, the lockdown has been a huge success and by blindsiding the local populace and Pakistan, India has won a major political and diplomatic victory.

Doval himself is visible on the ground seen talking to locals and convincing them that their only option remains India and its development model. Islamic radicalisation in the main of Wahhabi Salafism persuasion which indoctrinates the youth in the art of political jihad is India's biggest worry. Its rampant spread using the dark web and the onion router have only inflamed passions.

Given that the Pulwama attack was conducted by a local fidayeen, India is treading cautiously. However, with all the key nations on board and saying categorically that this is India's internal matter, the path for the BJP is now strewn with imponderables for it has to lift the gridlock and allow easing of life.

With Doval acting as the pointman, it is not just Monday's Id festival which will test the Centre's resolve, but equally the whole week is likely to be difficult. August 14 is Pakistan's Independence Day followed by India's Independence Day on August 15 when panchayats across south Kashmir will unfurl the Indian tricolour in troubled districts on Shopian, Kulgam, Pulwama and Anantnag.

In terms of optics and messaging, the BJP government is insistent that the tricolour is raised in all these areas. Doval in the Valley is liaising constantly with the paramilitary, Army Commanders and other Unified Command pyramid and matrix to keep ahead in this game of brinkmanship. India does not want to appear weak at any point in this display of resolve after taking such a decision.

The government has acted with great alacrity in airlifting all the potential leadership of the intifada - stone pelting - and separatist movements. This was done with deliberate intent and two different tranches, these elements which foment trouble have been moved to the Agra and Bareilly jails. Separatists and political leaders too have been corralled for this specific purpose. In fact, it now emerges that this exercise with the full backing of the NSA has been conducted 15 days prior to the actual shifting.

Several high protection jails in UP namely Agra and Bareilly were inspected by a team of IB and JKAP, a similar exercise of vetting was carried out in Haryana as well. Once the green light came, the airlift began and armed convoys were used.

The security grid across Kashmir Valley while strengthened is prepared for all eventualities and stone pelting and violent protests as well as skirmishes with the reorganised apparatus are all ready and waiting.

But three vital days one after the other in a sequence are what Doval and his team are dealing with. Once these three days pass with relative calm, then round one would go to India in its quest for permanent peace in the Valley. Even as the Govt takes no chances, it will not tolerate any disturbances within the Valley and any attempts by Pakistan to sneak in proxies. Red alert and full vigil of ground forces is in place to deal with all eventualities.

Previous Article15 trains delayed due to snag at Okhla station
Next Article Don't want in-laws or land in Kashmir: Punia
Must Read