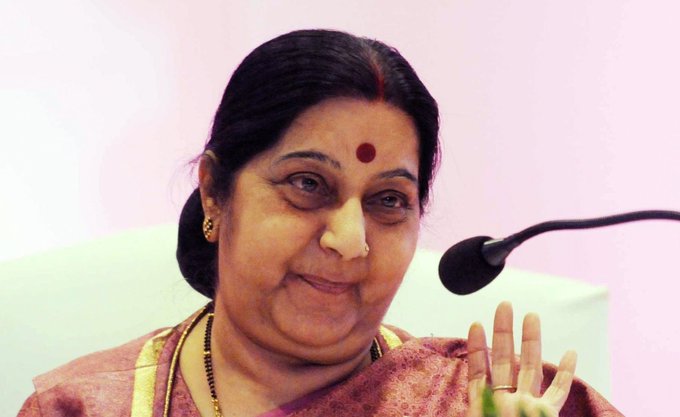 The veteran BJP leader was brought to AIIMS in a critical condition after suffering a heart attack but soon passed away, the sources said.

Union Ministers Rajnath Singh, Nitin Gadkari, Prakash Javadekar, and Harsh Vardhan, and BJP Working President J.P. Nadda arrived at the hospital as they got the news.

Her body has been taken to her residence at 6, Jantar Mantar from the AIIMS. Her mortal remains would be kept at the Bharatiya Janata Party (BJP) headquarters from 11 a.m. to 1 p.m. so that people can pay their last respects.

Leaders from across the political spectrum condoled the death of Sushma Swaraj, who had also been the first woman Chief Minister of Delhi.

Prime Minister Narendra Modi said that a "glorious period in Indian politics" had ended and recalled her efforts as External Affairs Minister in his first government in helping any Indians abroad in any trouble.

"An excellent administrator, Sushma Ji set high standards in every Ministry she handled. She played a key role in bettering India's ties with various nations. As a Minister we also saw her compassionate side, helping fellow Indians who were in distress in any part of the world.

"A glorious chapter in Indian politics comes to an end. India grieves the demise of a remarkable leader who devoted her life to public service and bettering lives of the poor. Sushma Swaraj Ji was one of her kind, who was a source of inspiration for crores of people," he said in a series of tweets.

"A sharp orator, an ideal worker, a beloved people's leader, and a hard-working minister, she has left an indelible mark on Indian politics through her many roles," Shah added.

Senior Congress leader Ghulam Nabi Azad said: "She would call me her brother... I have lost my sister today. Her sudden demise is a shock. She was a great leader. I pray to the almighty that her soul rests in peace."

Minister of State for Finance and Corporate Affairs Anurag Thakur tweeted: "India's most loved Foreign Minister is no more. It is not only a loss for me but for the party and the nation. She has been a guiding force for young leaders like me."

Condolences also poured in from foreign leaders on the death of the former External Affairs Minister.