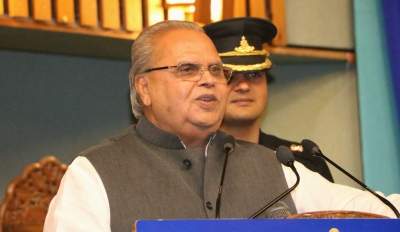 Srinagar: Jammu and Kashmir Governor Satya Pal Malik addresses during a programme organised for the distribution of free-to-air Doordarshan set-top boxes to border residents, in Srinagar on June 22, 2019. Speaking at the function, the J&K Governor on Saturday said that the separatist Hurriyat leaders are ready for talks with the government. (Photo: IANS)

Srinagar (IANS) While the separatists are shell shocked and certain that Delhi is going to do what it plans to do in Jammu and Kashmir, it is the mainstream politicians who are behaving as if a cat has been set loose among the pigeons.

Despite requests by her security that she should not leave her residence for security reasons yesterday evening, former state chief minister and Peoples Democratic Party (PDP) President, Mehbooba Mufti reportedly managed to give her security a slip and landed at the high security Gupkar Road residence of National Conference (NC) President and Parliament member, Farooq Abdullah.

Sources said she told the elder Abdullah that this was a crucial time for the mainstream political parties and they needed to sink their differences for "protection of state's special status".

According to sources privy to the meeting, Abdullah told Mufti that he was not keeping in good health and therefore would not be able to accompany her to meet Governor Satya Pal Malik.

Sources said Abdullah told Mufti that his son and National Conference Vice President, Omar Abdullah was in Delhi and that he would convene an all-party meeting on Sunday.

The three of them, accompanied by some other PDP and PC leaders, went to meet the Governor at the Raj Bhawan.

Officials said the Governor asked the group to be calm and not listen to rumours. "I will try to get in touch with people in Delhi and then make a statement tomorrow," the Governor is believed to have told the delegation.

Sajad Lone and Shah Faesal later said that the Governor had given them assurances, but "those were not enough".

Omar Abdullah landed here on Friday and soon went into a huddle with his party's senior leaders at his residence. His party sources said Omar would now call on the Governor as part of the effort made by other political leaders yesterday.

Top sources in his party said Omar was calling on the Governor to obtain whatever assurance the Raj Bhawan could give him, but neither the PC leader nor any other mainstream politician expected their meeting with Governor Malik to set the ball rolling in the reverse direction.

"How can the Governor advise the Centre to reverse what must have been already decided in consultation with him?" said a senior NC leader.

"What has to happen looks like happening," the leader said virtually agreeing that what Delhi had in mind was a fait accompli, Kashmiri leaders can do nothing to avoid.

Previous ArticleCalling off Amarnath yatra unprecedented: Karan Singh
Next Article 22 convicted for burning 3 of family alive in Jharkhand
Must Read