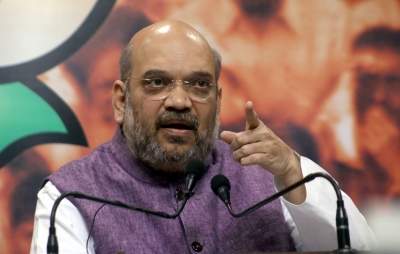 New Delhi (IANS) Home Minister Amit Shah on Wednesday said there was a need for a tough law to end terror and the amended Unlawful Activities (Prevention) Amendment Bill will help the Centre to designate individuals as terrorists without encroaching on the powers of states.

Referring in the Lok Sabha to the provisions of the Bill that allow an individual to be designated as terrorist, Shah promised that the new law would not be misused.

He put up a strong defence of the government's proposals, arguing that terrorists such as Indian Mujahideen's Yasin Bhatkal, who was under the radar for years, would have been caught much earlier if he had been designated a terrorist.

"There's a need for a provision to declare an individual as a terrorist. The UN has a procedure for it, the US has it, even Pakistan has it, China, Israel, European Union... Everyone has done it."

Shah pointed out that if a terrorist group was banned, a terrorist could easily set up another.

He said the Modi government had only brought an amendment to the law which was enacted by Congress and whose provisions were later made stringent.

The Congress and several opposition parties staged a walk out after the Minister's reply, demanding that the Bill be sent to a Standing Committee.

The Minister said that what Congress governments did "was right and what the BJP-led government is doing is also right".

"The law was enacted in 1967 by a Congress government-led by then Prime Minister Indira Gandhi and amendments made to it in 2004, 2008 and 2013 when Congress was in power. Who made the law stringent? What you did was right, what we we are doing is also right," he said.

He asked opposition members about their concerns over powers of states when the Congress had made changes to the law to make it stringent.

Shah said Congress member Manish Tewari had asked what was the need for tough laws and underlined that terror-related problems were resolved through political dialogue.

"There is need for tough laws to end terrorism," the Minister said.

Several other opposition leaders, including the Trinamool Congress's Mahua Moitra, objected to the changes, saying the law could be misused to target individuals.

"If the Centre wants to target someone, they will get them somehow with the help of some law. Opposition leaders, minorities, right activists and others if they disagree with the homogenous idea of India that this government is trying to thrust upon us, the opposition runs the risk of being labelled as anti-national," Moitra said.

"Why is the opposition called anti-national every time we disagree with the government on issues of national security and policing?"

Replying, Shah said no one would harass genuine social activists. "There are in fact many social activists who are doing good work... But we will smash the urban Maoists."

He accused the Congress of double standards on the UAPA.

"When you (opposition) question us you don't see who brought the law and amendments, who made it stringent. It was brought when you were in power. What you did then was right and what I'm doing now is also right," the Minister said.

"A government fights terrorism; it shouldn't matter which party is in power," he added.