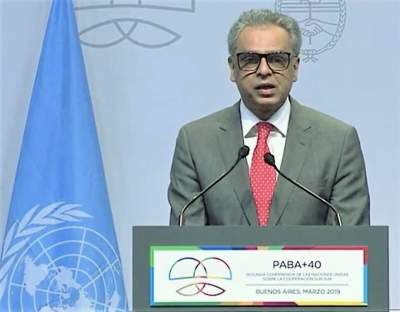 "NAM needs to be in the vanguard of those addressing the primary issues of our times that cry for global cooperation, rather than become a platform for venting bilateral grievances between members," Syed Akbaruddin, India's Permanent Representative, told the meeting in the Venezuelan capital, Caracas, on Sunday.

While reacting to the statement by Andleeb Abbas, Pakistan's Parliamentary Secretary for Foreign Affairs, on Kashmir and terrorism at the conference he did not mention her or her country by name, but it was clear from the context who his remarks were directed at.

"That no other member is responsive to such a self-serving narrative is a telling rejoinder that NAM never was and never can be a platform for pursuits aimed at undermining the territorial integrity of a State by another State," Akbaruddin said.

In dealing with terrorism, he said: "We, as NAM countries, need to take the lead as it is our citizens that stand to lose the most from the lack of coordinated and coherent responses."

Defending the anti-India terrorists operating from Pakistan, Abbas had asserted that NAM had rejected "attempts by some countries to equate freedom struggles of people under foreign occupation with terrorism".

She was apparently referring to a statement adopted at the 2006 NAM summit in Havana, Cuba, which unequivocally condemned terrorism in all its manifestations but said that legitimate struggles for self-determination should not be equated with terrorism.

That proposition, reiterated in other contexts also, did not legitimise terrorism but was only against twisting meanings of both terrorism and self-determination struggles.

That was made mainly in the context of the Palestinian quest for self-determination and NAM has not taken up the Kashmir issue, despite attempts by Pakistan, a latecomer to the movement, having shunned it at its formation.

Giving a piece of advice directed at Pakistan, Akbaruddin counselled that members should "ponder before turning to fellow member" with issues which contravene NAM traditions, which are not part of the discussions of the outcome document and which "find no resonance in the wider membership".

Abbas also brought up the report of the UN High Commissioner for Human Rights on Kashmir, according to government broadcaster Radio Pakistan.

India has rejected the report as a "motivated narrative" that seems "to accord legitimacy to terrorism".

The response to Pakistan was only a small part of Akbaruddin's speech, which focused on the challenges now faced by NAM in a world that is starkly different from the time of its founding in 1955 when colonialism dominated vast areas of Asia and Africa.

"Today the imperatives that drew us together in our formative years have largely been met" but Palestine was one of the unfulfilled goals, he said. "Our support for the cause of Palestine shall continue," he added.

"The NAM has a glorious past, however, how it will be perceived in the future will be defined by how we address the defining challenges of our times -- climate change, digital technologies and terrorism, as well as how we reform existing multilateral institutions to our needs," he said.

Terrorism posed a major challenge to the NAM taking a toll on its citizens and disrupting its development efforts, he said.

"Unfortunately, all our talk about combating the scourge of terrorism has not been matched by actions. Terrorists continue to operate with great impunity and greater inhumanity," he said.

Previous Article7,500 people register online to witness rocket launch
Next Article No top US official in airport to greet Imran Khan
Must Read