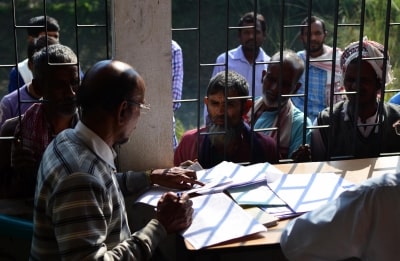 Kamrup (Assam): Villagers check their names as Assam government published the part draft of National Register of Citizens (NRC) which includes names of 1.9 crore of people of total 3.29 crore people in the state, in Gumi village of state's Kamrup district on Jan 1, 2018. (Photo: IANS)

New Delhi (IANS) The process of preparing the National Register of Citizens (NRC) in Assam has been rigged due to corruption, believes the government which now wants to engage senior officers for re-verification of the exercise aimed at identifying illegal immigrants for deportation.

The government is of the view that the re-verification should be administered by officials, who were not involved in the initial process, and also at senior level to enable fair and independent verification.

The Centre is willing to engage Class I officers, who have extensive "knowledge and experience of handling process of investigation/enquiry" specifically for the re-verification.

There have been instances where field level officers have been arrested for taking bribes for entering the names in the NRC list.

The suspicion of corruption in the process was articulated by the Centre in the Supreme Court on Friday, when it sought more time beyond the July 31 deadline for publishing the final list of NRC.

In the draft NRC lists published in July 2018 and June this year, around 41 lakh people have been excluded. Around 36 lakh have filed claims against their exclusion and objections have been filed against two lakh inclusions.

Hearings for these claims and objections are underway at various NRC centres.

Solicitor General Tushar Mehta, appearing for the Centre and Assam government, told the top court that there was a growing perception that exclusions and inclusions have been made in the list in a wrong manner.

"Apparently, there are more wrong inclusions on the list due to corrupt practices by lower level officers. Therefore, we need re-verification. We have experienced this wrongful inclusion in districts sharing the border with Bangladesh," Mehta said.

The Assam government intends to conduct verification of the names included in the final draft for certain districts.

This process should take place at "different from the place where the NRC verification had taken place," the government wants.

The government has contended that it requires a huge number of officials and people to work in tandem at the ground level, "considering the unprecedented large scale complexities involved and the issues coming forward by way of various applications and new reports."

The government asserts that the exercise of sample re-verification, for both inclusion and exclusion, must necessarily be undertaken before the publication of the final list.

To this, Mehta replied that re-verification will help the authorities weed out illegal immigrants who have bribed NRC officials to get their names on the list.

Hajela will submit a supplementary list on the inclusion and exclusion of names on the NRC list by July 31.The matter is listed for further hearing on Tuesday.