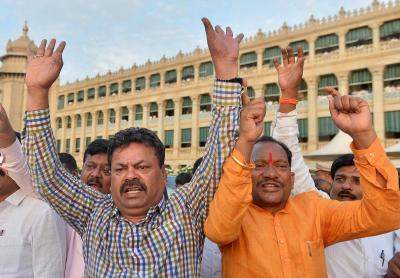 Bengaluru (IANS) The opposition BJP is awaiting a Supreme Court ruling on the petitions of the 10 rebel Congress-JD-S MLAs and the Karnataka Assembly Speaker on their resignations for its next move against the coalition government in the 10-day monsoon session of the state legislature beginning on Friday afternoon, a party official said here.

"We are waiting for the Supreme Court verdict on the petitions of the rebel legislators and the Speaker's plea for more time to decide on their resignations as hearing on them is scheduled later in the day for our next move in the Assembly," Bharatiya Janata Party spokesman G. Madhusudana told IANS here.

As Assembly Speaker K.R. Ramesh Kumar has listed "obituary references" as the only business for the day, the House is likely to be adjourned till July 15 after paying homage to all those political leaders, lawmakers and noted personalities who died since the Assembly met in February.

A three-bench of the apex court, headed by Chief Justice Ranjan Gogoi is scheduled to hear on the Speaker's plea for modifying its July 11 order to seek more time in deciding the resignations of the seven Congress and three JD-S legislators re-submitted on Thursday evening as per its directive.

"In case the top court grants time till Monday (July 15) for the Speaker to decide on the resignations, we will ask state Governor Vajubhai Vala to direct Chief Minister H.D. Kumaraswamy to take a floor test in the Assembly on Tuesday (July 16), as his coalition government has no majority to remain in the office in the absence of the 16 legislators who resigned," added Madhusudana.

The 10 rebel legislators who petitioned the apex court on July 10 against the Speaker for reportedly delaying to accept their resignations are Ramesh Jarkiholi, Byrati Basavraju, B.C. Patil, Shivaram Hebbar, S.T. Somashekar, Prathapgouda Patil and Mahesh Kumatahali of the Congress and K. Gopalaiah, A.H. Vishwanath, K.C. Narayan Gowda of the JD-S.

"As all the 13 Congress and three JD-S rebel legislators are unlikely to attend the session, it will be difficult for the government to pass the Finance Bill of the state budget for this fiscal (2019-20) which was presented for vote-on-account on February 8 as it lacks majority," said Madhusudana.

With 16 rebel legislators of the ruling allies absenting from the House despite a whip issued to them by their respective parties to attend the session and one KPJP lawmaker and one Independent withdrawing support to the government, its majority in the House is reduced to 101 from 118, excluding the Speaker and one nominated in the 225-member Assembly as against 105 of the BJP.

As the nominated member has no voting right, the BJP's strength in the House will be 107 with the support of KPJP member R. Shankar and Independent H. Nagesh, who resigned as ministers but not as legislators on July 8.

"In the absence of the 16 rebels legislators, the government will not be able to pass the state budget in the Assembly, as we will press for division if it (finance bill) is put to voice vote. If the budget is not passed by the House, the fall of the government is imminent," said Madhusudana.

The Congress has petitioned the Speaker to disqualify nine of the rebels excluding Reddy, Sudhakar and Nagaraj, whom it is trying to pacify to withdraw their resignations in a bid to save the 13-month fledgling coalition government.

The JD-S has also petitioned the Speaker to disqualify its three rebels MLAs who resigned and defied its whip to attend the assembly session.