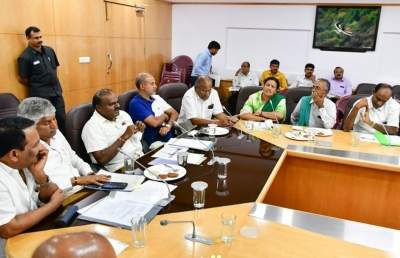 Bengaluru (IANS) A restive BJP is hoping Karnataka Governor Vajubhai Vala would direct Chief Minister H.D. Kumaraswamy to take the floor test in the Assembly on Friday to prove if he has majority after 16 legislators of the ruling allies resigned, a party official said Thursday.

"We are hoping for the Governor to direct the Chief Minister to move a trust-vote in the Assembly on Friday when the monsoon session begins as his coalition government is reduced to minority after 13 Congress and 3 JD-S lawmakers resigned and 2 more withdrew support to him," BJP's G. Madhusudan told IANS here.

The opposition Bharatiya Janata Party (BJP), which has 105 lawmakers in the 225-member Assembly has decided to prevent the House proceedings if the Speaker does not ask Kumaraswamy to first conduct the floor test as the effective strength of the ruling allies is reduced to 101 from 118 and those MLAs who resigned and withdrew support will not be present in the House.

"As all the legislators and the two who withdrew support have given a copy of their resignation letters to the Governor, he (Vala) is entitled to suo moto ask Kumaraswamy to face the trial of strength as his government is reduced to minority," asserted Madhusudan.

The 10-day Monsoon Session of the state legislature has been convened to take up the Finance Bill to pass the state budget for this fiscal (2019-20), discuss the drought situation, deficit monsoon and the recent multi-crore IMA ponzi scheme, which duped thousands of investors across the state.

"Our party's legislators are meeting later in the day to chalk-out strategy to counter the speaker and the government if the trust-vote is not taken up first when the session begins at 11:00 a.m. on Friday," the official said.

Clarifying that the BJP would not move a no-confidence motion against the beleaguered government, Madhusudan said the onus was on the chief minister to prove he has majority with 18 of the ruling legislators absent in the assembly.

"Though the Speaker has not accepted the resignations so far, the absence of the 18 legislators in the Assembly who resigned, does not prevent him from conducting the floor test," the BJP spokesman claimed.

Meanwhile, the city police have imposed section 144 of the CrPC two kilometre around the state legislature building and the Secretariat in the city centre from Thursday to prevent protests, demonstrations, rallies and assembly of more than five persons and maintain peace till July 14 when the monsoon session ends.

The Congress has also called for a meeting of its legislators to prepare for the session and face the floor test if conducted.

"Though all our ministers (21) have submitted their resignations to the Congress Legislature Party (CLP) leader Siddaramaiah to enable the Chief Minister to reconstitute the cabinet, they are attending the cabinet meeting being held at Vidhan Soudha later in the day," Congress spokesman Ravi Gowda told IANS.