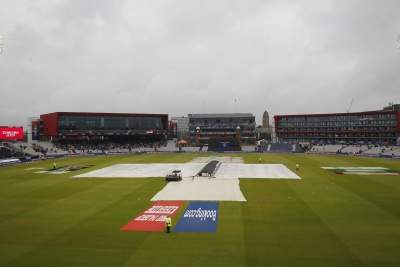 Manchester (IANS) After the rain interruption on Tuesday, the forecast for Wednesday doesn't look too good either, as there are chances of showers in patches even as India and New Zealand look to resume their battle in the first semi-final of the 2019 World Cup at Old Trafford. But it is advantage India if play is indeed washed off again on the reserve day.

A tied match will use a super over to determine the winner. If after the scheduled day and reserve day the semi-final match has still not reached a result, the higher placed team from the league stage will progress to the final.

On Tuesday, it was a clear case of frustration as incessant drizzle saw the match officials having to call off the game after the players had initially walked off during the 47th over of the New Zealand innings with the Indian bowlers in control on a slow wicket.

While the forecast was for spells of shower, a nagging drizzle from around 2 p.m. in the afternoon till around 5 p.m. saw the covers staying on. While it did relent for a bit around 5.40 p.m., calling for the officials to inspect the ground at 6.10 p.m., another spell of drizzle saw the game being finally called off with the reserve day coming into play.

While both teams will want to battle it out in the middle and make their way to the final with the honour of winning the semi-final encounter, it clearly is advantage India as the notorious Manchester weather decides to play spoilsport.