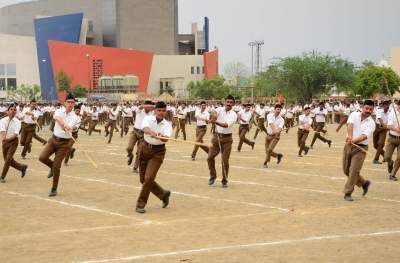 New Delhi (IANS) From renovating and reviving deserted temples in the Kashmir Valley to expansion of new "shakhas" in the higher reaches of the Himalayas, the Rashtriya Swayamsevak Sangh (RSS) seems to be on an expansion mode in Jammu and Kashmir. Besides expansion plans, the top leadership of the RSS also endorses fresh delimitation of Assembly constituencies in the state which would subsequently benefit the Jammu region by giving it more seats than Kashmir.

Top sources in the RSS office in New Delhi said that scores of ancient temples were deserted in the terror-hit valley and would now be renovated and revived for Hindu pilgrims. One such historic temple, dedicated to Goddess Kheer Bhawani, witnessed a huge gathering of Kashmiri Pandits at its annual festival last month. On the occasion, Governor Satya Pal Malik had ordered special arrangements for stay of Kashmiri Pundits at the temple, located 25 km from Srinagar.

RSS pracharaks are now trying to revive deserted temples not only in the valley region but also in Jammu. On reviving ancient temples in the state, the RSS in its annual report (2019), says: "'Purmandal' is a holy place on the banks of Devika river, 40 km away from Jammu. Once a centre of Sanskrit learning, over a period of time this place has been ignored. To revive its (temple) importance a trust has been formed."

To bring the minorities residing in border areas and places far off from Srinagar into the mainstream, RSS leaders have launched a mega project called "Ekal Vidyalaya" (one teacher, one class). "The concept is that a single teacher virtually runs a small school in a single class. Remote villages where education has not yet reached are covered under Ekal Vidyalaya," said a senior functionary of the RSS working in Jammu and Kashmir.

As of now, 6,000 teachers are involved in the project which covers area such as Ladakh and Kargil. Besides the teaching project, RSS is also focusing on Muslims residing near the international border and Line of Control. The RSS report says that "the border areas suffer from indiscriminate firings across the border. As a consequence the people suffer from migration, disruption in education and health services and a general feeling of insecurity. Efforts have been launched to address these issues. As a primary step 457 villages out of total 701 were surveyed. A core committee has been formed with the help of various like minded organisations."

On the issue of delimitation of state assembly constituencies, the senior functionary of the RSS said that the Sangh had always opposed the move of the former Chief Minister Farooq Abdullah who froze the delimitation exercise until 2026 by amending the Jammu and Kashmir Representation of the People Act, 1957.

"We are with the sentiments of the people who feel that Jammu region requires more seats on basis of its population. We hope the government would consider their demand," the RSS functionary said. Sources said RSS leaders are of the view that the government should consider delimitation of Assembly constituencies as Farooq Abdullah's move was aimed at benefiting political parties which were eyeing the Muslim vote bank in the Valley region.

However, a fresh delimitation (if brought about by a Delimitation Commission) could alter the electoral map of the state, thus enabling a larger representation from Jammu by virtue of its size. A delimitation exercise on these lines could affect the composition of the state Assembly with the Jammu region contributing more seats to the House, hitherto dominated by reprsentatives from the Valley.

Previous ArticleNo one is allowed to take law in their hands says CM
Next Article Garg indicates PSBs, PSUs may get more time to comply with 35% listing norm
Must Read