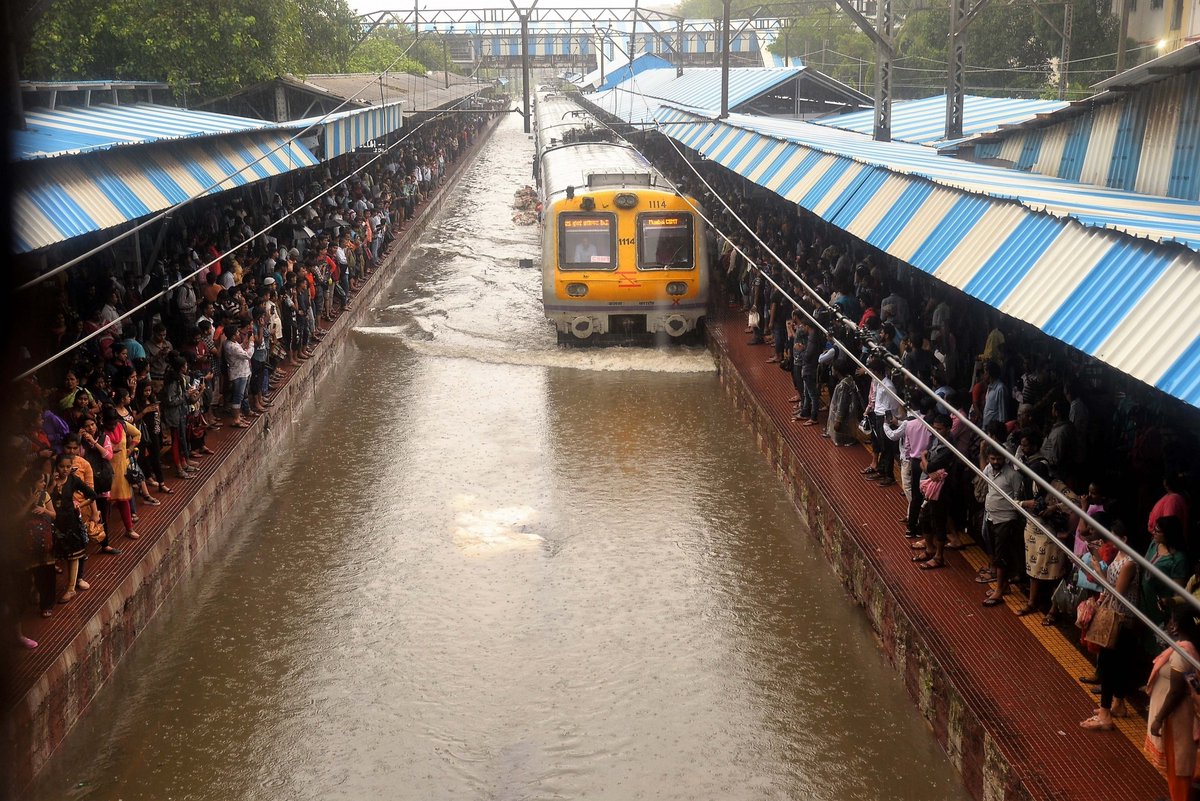 Mumbai (IANS) At least 39 persons were killed across Maharashtra as relentless rain created mayhem and left Mumbai paralysed with the country's commercial capital being pounded by record rainfall on Tuesday, officials said.

Offering no respite, heavy showers are expected to continue most of this week, the weather office said.

Battered with over 375 mm rain, the highest July rainfall within a 24-hour period since July 1974, Mumbai has received around 35 percent of its average annual total rainfall.

As a precautionary measure, the state government declared a public holiday in the city and the city administration ordered all schools and colleges to be shut while the Education Department postponing all examinations scheduled for Tuesday.

Many parts of Mumbai city and its suburbs, as well as towns in adjoining Raigad, Thane and Palghar districts, turned into huge tracts of muddy water, witnessing people struggling to safety in waist-deep water. Small vehicles were submerged, and several tempos, trucks and heavy vehicles stranded on the roads adding to traffic snarls.

The inundation also stopped local and long-distance trains in their tracks and stranding thousands as road traffic, trains and flights were hit for hours.

At least 150 BEST buses in Mumbai were also submerged and stranded at various locations since this morning, but operations continued near-normal with diversions and cancellations of services.

The Central Railway had stopped its services since early Tuesday as tracks were underwater in many places, especially Sion, Chunabhatti, Kurla, Bhandup and many commuters waded through the flood waters to reach their destinations.

After nearly 15 hours, the CR resumed full services around 5.15 pm, though the Western Railway managed to trudge along with delays and cancellations.

Domestic and international flight operations were hit at Chhatrapati Shivaji International Airport due to heavy rains coupled with a SpiceJet aircraft with 167 passengers overshooting the runway and getting stuck in soft mud.

A 150-metre long ramp was being built to push the stranded aircraft and clear the runway, but it was expected to take another 48 hours till the alternative (shorter) runway is operational.

As parts of Mumbai experienced a lull in rains for a few hours this afternoon, thousands of harried people rushed out of their homes to buy stocks of vegetables, fruits, groceries, milk from local markets, despite the higher rates being charged.

The Indian Navy's team of divers from INS Tanaji deployed rubber boats, life-jackets, lifebuoys to rescued over 1,000 people stranded in rising waters at Krantinagar slums in Kurla in north-east Mumbai.

The rain also caused a spate of fatalities.

Early on Tuesday, the compound wall of a water reservoir at Pimpripada in Malad collapsed on a dozen hutments, leaving 21 killed and another 78 injured.

The National Disaster Response Force, the Mumbai Fire Brigade and other agencies launched a massive rescue effort to remove dig out several others feared trapped in the rubble.

Chief Minister Devendra Fadnavis, who visited the victims of the tragedy, announced compensation of Rs 500,000 for each of the deceased, even as agitated Congress and Nationalist Congress Party leaders blamed the ruling Bharatiya Janata Party-Shiv Sena for the mess and demanded action against those responsible for the loss of human lives.

"In the past 12 hours, the city has received an unprecedented 300 to 400 mm rains, the highest in the past decade. The existing drainage systems are unable to cope with such a heavy downpour, coupled with a high tide this afternoon," Fadnavis told media persons.

Two persons - Irfan S. Khan, 38, and Gulshad Sheikh, 37, who were trapped inside a SUV in the flooded Malad subway since last night were found dead on Tuesday.

Gabri Singh, 45, the security guard of a private building, was killed in a wall crash in Mulund, and 22-year old Gopal V. Jha was electrocuted at Nehru Nagar in Vile Parle.

In adjoining Thane district, three persons were killed when the boundary wall of National Urdu School crashed in Kalyan town and several more were injured, and two persons were washed away in flood waters in an overflowing river in Jawahar.

Also on Tuesday, a 15-feet high compound wall of the Bharatiya Vidyapeeth College in Pune crashed on some hutments beside it, killing at least six persons. NDRF teams were at the site to extricate those still feared trapped in the debris.

In Nashik, two persons were killed by drowning in a water tank and one woman killed when she was struck by lightning in Buldhana.

Offering no respite, the India Meteorological Department predicted extremely heavy to very heavy rains in Mumbai, many parts of coastal Konkan, besides Vidarbha and Marathwada till Friday.