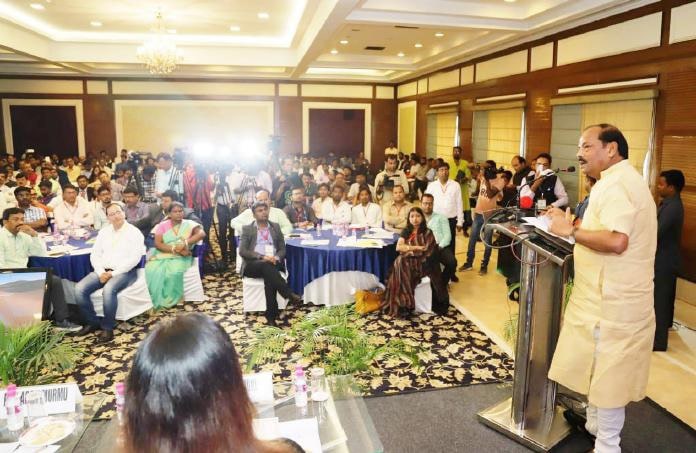 Ranchi: Jharkhand Chief Minister Raghubar Das today said that in the name of Jal Junglee and Zameen the tribals have been misled for many years in the state but in the last 4.5 years their development has gathered strength.

Addressing the second tribal development meet organised by CII here he said that the state government was working to make the youth of the tribal, dalit and minority communities come closer to development and said that such tribal youth who want to do preparations of IAS for them the state government will give an economic help of Rs 1 lakh and youth who will be setting Industries they would be given 50 percent subsidy on land and even the remaining 50 percent will have to be paid in 10 installments in 5 years.

He said that the state government has also formed tribal finance commission, OBC and Tribal finance commissions and will give them Rs 5 crore each.He said that 17 districts of Jharkhand are backward out of which 6 are aspirational districts and creating employment for the tribals, dalits, minorities is the priority for the state government and was also working for enhancing their skills.

The Chief Minister asked the industry body to organize programs at district and block levels as by organizing programs in the hotels will not be able to bring in more people. Mr Das urged the youth to work for changing the fortunes of the state and also bring a change in their thinking process. He said that for decades the youth were misled but now all misconceptions needed to be removed. Mr Das said that in the era of digitalization they needed to ensure their participation as a change in thought process will change in the society and asked the youth to identify the anti-development forces and make their contribution for the development of the nation.

He asked the youth belonging to the tribal and dalit community to get linked with startup and standup scheme and make small companies and can even opt for the IT sector for which loans will be provided to them. He said that small entrepreneurs should also get a loan as it helps to create employment. He said that Jharkhand has natural and mineral wealth and even people of the state are simple and honest and there is no reason why the state should remain poor. Mr Das said that tribals have looked after the culture of the state and now it is the responsibility of state government to take them forward.