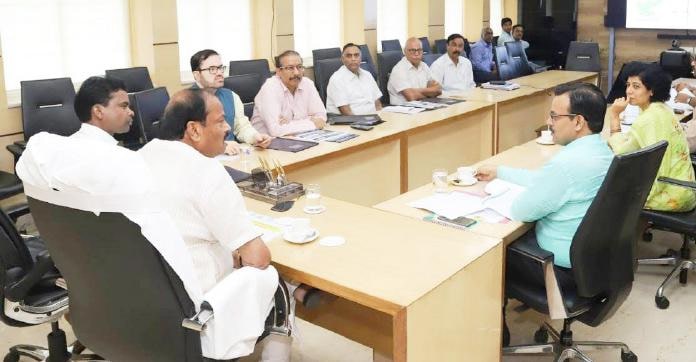 Ranchi: Chief Minister Raghubar Das has directed to complete the task of providing water through pipelines in the villages inhabited by primitive tribes in the state by September 30.

The task for providing water through pipelines in 6676 primitive tribe villages was on and said that in 75 percent villages the work should be completed by December 15. Mr Das while reviewing the functioning of the water resources and sanitation department suggested that dam at a height of 6 to 10 feet should be constructed to preserve the rainwater.

He said that before 2015 nobody worked for providing drinking water in the villages of the tribals as work started after 2015 and work in 2251 such villages was started and work was completed in 162 such villages. He said that similarly after 14 years of state formation drinking water supply scheme started in 11124 villages out of which work has been completed on 6676 villages and by October 15 work would be completed in more than 5000 villages.

Mr Das said that in the 28469 non-tribal villages work on providing drinking water through pipeline should be done through funds of DMFT, 14th finance commission funds, funds received for aspirational districts and from MLA funds.

In the meeting, it was informed that the percentage of household toilets which was 16.25 percent has now increased to almost 100 percent and said that leftover homes should be covered without any delay.

Adding further the Chief Minister said that in 2015- 16 only 6 check dam projects were completed which could irrigate 290 hectares of land but till 2019, 1300 check dams have been built through which irrigation capacity has increased to 70,067 hectares. Minister for Water Resources and Sanitation Ramchandra Sahis, Chief Secretary DK Tiwari, Additional Chief Secretary Water Resources Arun Kumar Singh and others were present on the occasion.

Previous ArticleShah slams Nehru for Kashmir, but vows no delay if EC decides polls
Next Article 28 IAS and IPS officials transferred and posted in Jharkhand
Must Read