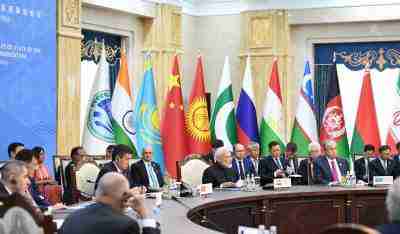 He also pitched for an international conference to discuss how the menace of terror could be fought better.

In his address at the Summit of eight-nation Shanghai Cooperation Organisation (SCO) here, he said the forces of humanity should shed their narrow minded approach and join hands to eliminate the scourge of terrorism.

The SCO-Regional Anti-Terrorist Structure should use all its power to fight terrorism, Modi told the leaders of the grouping, including Chinese President Xi Jinping and Russian President Vladimir Putin.

"Last Sunday, during my visit to Sri Lanka, I went to the St Antony Church (which was attacked by terrorists on April 21). There I realized that the ghastly face of terrorism can appear anywhere and anytime, claiming the lives of innocent people," the Prime Minister said.

"To deal with this threat, all forces of humanity should come out of their narrow minded approach and come together," he said.

The St Antony Church was witness to the bloodiest terror attack in Sri Lanka in which around 250 people were killed.

Modi went on to add, "The countries which promote, support and fund terrorism must be held accountable," in a clear reference to PakistanAwhose Prime Minister was also present.

"India calls for an international meet to discuss how to deal with terrorism," he said.

Underlining the need for stability and security in the SCO region, the Prime minister said an important element in this regard is acea peaceful, united, secure and prosperous Afghanistan".

He said India supports the efforts for an "Afghan-led, Afghan-owned and Afghan-controlled peace process" and expressed happiness that a road map has been prepared for the SCO-Afghanistan Contact Group.

During his address, Modi also spoke about the need for the SCO members to work for better connectivity, healthcare, alternate energy and humanitarian cooperation.

In the context of connectivity, he said India and the SCO region have links dating back to thousands of years.

"This, our common region, needs better connectivity in the modern era. India's focus on connectivity is reflected in the initiatives like the International North-South Transport Corridor, Chahbahar Port (development) and Ashgabat agreement," he said.

The Ashgabat agreement, which India joined last year, is a multi-modal transport pact among the nations like Kazakhstan, Uzbekistan, Turkmenistan, Iran, Pakistan and Oman.

India also started an air freight corridor connecting Kabul and Kandahar in Afghanistan with New Delhi and Mumbai in 2017, the Prime Minister said.

"Connectivity is a must for prosperity, regional integration, good governance, transparency and stability," he said.

Along with physical connectivity, the people-to-people connectivity holds no less importance," he said.

India's E-tourism visa is available for most of the SCO nations, Modi said and announced that the Indian tourism website will soon have a Russian interface and a 24X7 tourism helpline in Russian language for the convenience of the travelers from the SCO countries.

In the context of healthcare, he said the SCO should lay thrust on working in this area from 2019 to 2021.

India will be happy to share its experience regarding tele-medicine and medical tourism, he added.