IAF An-32 goes missing in northeast, no trace of wreckage 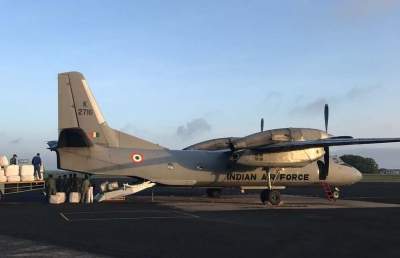 New Delhi/Itanagar/Guwahati (IANS) An Indian Air Force (IAF) An-32 transporter with 13 people on board went missing while flying from Assam to Arunachal Pradesh on Monday but there was no trace of the plane or its wreckage despite many hours of search.

The aircraft with 13 on board (eight aircrew and five passengers) had taken off from Assam's Jorhat at 12.27 p.m. for Mechuka Advanced Landing Ground in Arunachal Pradesh's West Siang district bordering China, but it lost contact with ground authorities at around 1 p.m.

The IAF flew sorties of its C-130 Super Hercules, An-32s and two Mi-17 helicopters along with Indian Army's Advanced Light Helicopters to locate the missing aircraft. Several leads from the ground about the possible location of the crash site were followed but no wreckage was found.

The IAF said in a statement that search operations will continue from air and by ground parties of Indian Army through the night.

Defence Minister Rajnath Singh, who was on his first visit to Jammu and Kashmir after taking over two days ago, spoke to IAF vice chief, Air Marshal Rakesh Singh Bhadauria and took stock of rescue operations. IAF chief B.S Dhanoa was to be in Sweden on a four-day visit.

Arunachal Pradesh Chief Minister Pema Khandu tweeted: "Praying for safety of all 13 persons who were on board."

The Deputy Commissioner of newly-created Shi Yomi district in Arunachal, Mito Dirchi, said there were some reports of a crash in the jungles of the district.

"We have sent a team for search which includes SP and some villagers. But we have not found any wreckage. We are going to search the areas tomorrow morning again."

The disappearance of the An-32 on Monday is eerily similar to the incident that took place in the same month 10 years ago in the same location involving the same type of aircraft and same number of personnel. The aircraft that crashed on June 9, 2009 was also operating in the same area with 13 on board. The wreckage was found days later over the Rinchi Hill above Hyeo village, about 60 km from the Line of Actual Control (LAC).

Among the 13 personnel on board in the latest incident, six are IAF officers including a wing commander. The terrain and weather conditions in the area makes flying challenging and familiarization sorties are carried out routinely along with air maintenance operations for the border troops.

The IAF has around 100 An-32s and the fleet has been undergoing upgradation, adding new avionics and other features.

This is the second major incident after the disappearance of an An-32 over the Bay of Bengal in 2016 with 29 on board. The mystery behind the accident could never be solved as the massive search over sea was called off after no trace of wreckage was found. The flight was on the way to Port Blair from Chennai.

Previous ArticleMGNREGA may see 30% hike in budgetary funds to spur rural jobs, consumption
Next Article Rain and thunderstorms provide relief from heat to people
Must Read