Nobel Prize in Medicine goes to cancer researchers from US, Japan 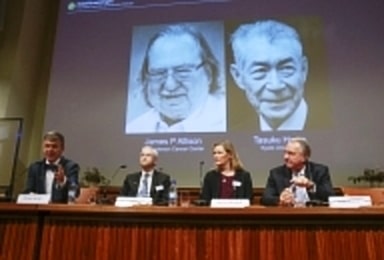 STOCKHOLM, Oct. 1, 2018 (Xinhua) -- Members of the Nobel Committee for Physiology or Medicine announce two scientists James P. Allison (L, screen) of U.S. and Tasuku Honjo (R, screen) of Japan share 2018 Nobel Prize in Physiology or Medicine during a press conference at the Karolinska Institute in Stockholm, Sweden, on Oct. 1, 2018. The Nobel assembly at the Karolinska Institute has decided to award the 2018 physiology or medicine prize jointly to James P. Allison and Tasuku Honjo for their disc

Stockholm (IANS): James Allison of the US and Tasuku Honjo of Japan have jointly won the Nobel Prize in Medicine on Monday for developing a pioneering therapeutic approach for cancer treatment.

The pair "revolutionised cancer treatment," showing how our immune system can be effectively engaged in the fight against tumor cells.

The treatment that the researchers helped develop, often referred to as "immune checkpoint therapy", has fundamentally changed the outcome for certain groups of patients with advanced cancer.

"By stimulating the inherent ability of our immune system to attack tumor cells this year's Nobel Laureates have established an entirely new principle for cancer therapy," the Nobel Assembly at Karolinska Institutet here said in a statement.

Allison, Professor at the University of Texas MD Anderson Cancer Center in US, studied a known protein, CTLA-4, that functions as a brake on the immune system.

He realised the potential of releasing the brake and thereby unleashing our immune cells to attack tumors. He then developed this concept into a brand new approach for treating patients.

In parallel, Honjo, Professor at Kyoto University in Japan, discovered a protein on immune cells and, after careful exploration of its function, eventually revealed that it also operates as a brake, but with a different mechanism of action.

Therapies based on his discovery proved to be strikingly effective in the fight against cancer, the Nobel Assembly at Karolinska Institutet, which awards the Nobel Prize in Medicine, said.

Honjo's research showed that the protein PD-1, similar to CTLA-4, functions as a T-cell brake.

The fundamental property of our immune system is the ability to discriminate "self" from "non-self" so that invading bacteria, viruses and other dangers can be attacked and eliminated. T cells, a type of white blood cell, are key players in this defence. 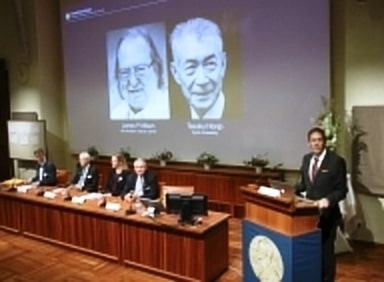 Allison and Honjo showed how different strategies for inhibiting the brakes on the immune system can be used in the treatment of cancer.

"The seminal discoveries by the two Laureates constitute a landmark in our fight against cancer," the statement added.

After the initial studies showing the effects of CTLA-4 and PD-1 blockade, the clinical development has been dramatic.

Of the two treatment strategies, checkpoint therapy against PD-1 has proven more effective and positive results are being observed in several types of cancer, including lung cancer, renal cancer, lymphoma and melanoma.

New clinical studies indicate that combination therapy, targeting both CTLA-4 and PD-1, can be even more effective, as demonstrated in patients with melanoma, a type of skin cancer.

Thus, Allison and Honjo have inspired efforts to combine different strategies to release the brakes on the immune system with the aim of eliminating tumor cells even more efficiently.

A large number of checkpoint therapy trials are currently underway against most types of cancer, and new checkpoint proteins are being tested as targets, the Nobel committee said.

What Allison and Honjo attempted was not something new. In fact, scientists have tried to engage the immune system in the fight against cancer for more than 100 years now. But until the seminal discoveries by the two Laureates, progress into clinical development was modest.

Checkpoint therapy has now revolutionised cancer treatment and has fundamentally changed the way we view how cancer can be managed, the Nobel committee said.