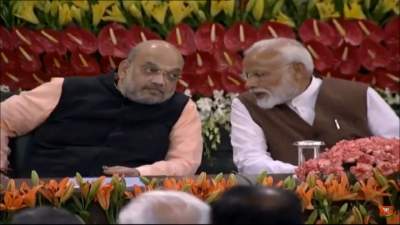 The meeting comes two days ahead of the swearing-in of the new government.

It was not clear immediately as to what transpired between them, but possibly they discussed the formation of the Council of Ministers.

The meeting, which lasted around five hours, also assumes significance as there is a buzz in the political circles thatAShah may join the government.

All eyes are now on the Council of Ministers, with several names doing the rounds.

The JD-U and Shiv Sena are likely to get two ministerial berths in the Modi government, one Cabinet berth and one minister of state (MoS) position.

The JD-U is the third largest party in the National Democratic Alliance, after the BJP and Shiv Sena. The BJP has 303 MPs while Shiv Sena has 18 MPs.

Harsimrat Kaur Badal of Akali Dal and Ram Vilas Paswan of LJP are also likely to be inducted in the Modi Cabinet.

Sources said that around 65 leaders may take oath of office and secrecy along with Prime Minister Modi.

They said many new and young faces may join the government as junior ministers while some of former ministers of state can be retained.