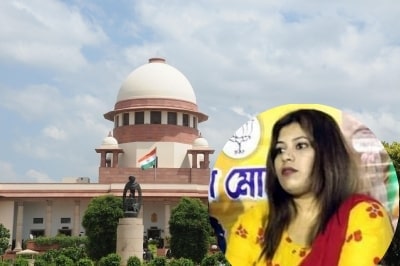 The court also ordered that upon her release, she should tender an apology.

Initially, the court had ordered Sharma to be released on bail on the subject that she should tender an apology.

Sharma's counsel Neerak Kishan Kaul vehemently argued that an apology would have a chilling effect on freedom of speech.

The court modified its order stating that upon her release, she will tender an apology.

During the arguments, Kaul said that political satire cannot be penalised. "It will set up a wrong trend."

The Bharatiya Janata Party leader was accused of sharing on social media a photo of the Trinamool Congress supremo photo-shopped on a picture of Bollywood actor Priyanka Chopra from last week's MET Gala event in New York City.

She was arrested on May 10 and remanded to 14 days judicial custody.