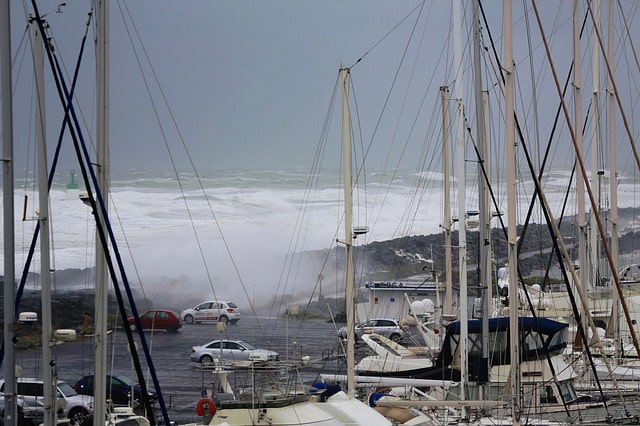 The giant sea wave of up to 2 metre (6.6ft) crashed into the city of Palu, located on Sulawesi island, not long after authorities had lifted a tsunami warning, the BBC reported.

Videos on social media showed people screaming and fleeing in panic. An unverified dramatic video footage of the tsunami hitting Palu showed the high waves sweeping away several buildings and then the large tilted mosque in the town, about 80 km from the quake's epicentre.

Indonesia's Disaster Management Agency said that several buildings in the city were damaged.

Five deaths were reported but it was not clear if those were as a result of the tsunami.

Dwikorita Karnawati, head of Indonesia's meteorology and geophysics agency, BMKG, said though the tsunami had receded, people were still missing.

"The situation is chaotic, people are running on the streets and buildings collapsed," she said.

Following the initial tremors, an early tsunami warning was issued by the Indonesian meteorological agency, but it was later lifted.

Between July 29 and August 19, at least 557 people died and almost 400,000 were displaced by four earthquakes with intensities varying between 6.3 and 6.9 magnitude which struck Indonesia's Lombok island.

Indonesia's deadliest-ever tremor struck Sumatra island in 2014 and triggered a tsunami that killed nearly 280,000 people in around a dozen countries along the Indian Ocean, with the biggest number of casualties registered in Indonesia.

Indonesia is prone to earthquakes because it lies on the Ring of Fire -- the line of frequent quakes and volcanic eruptions that circles virtually the entire Pacific rim.

More than half of the world's active volcanoes above sea level are part of the ring.