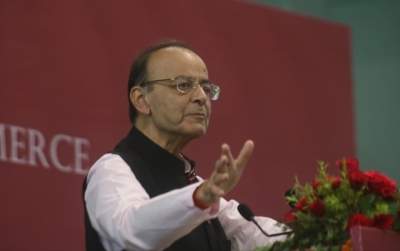 In a tweet, Arun Jaitley asked the Congress if there are two model codes of conduct -- they can call the Prime Minister thief but the Bharatiya Janata Party (BJP) cannot call a former PM corrupt.

The Congress had on Monday demanded that PM Modi be barred from election campaigning for calling former Prime Minister Rajiv Gandhi "corrupt".

"The comments of Prime Minister Modi about Rajiv Gandhiji are serious in nature. The language he used is shameful, which cannot be uttered again," Singhvi told reporters outside the Nirvachan Bhavan, the EC headquarters.

"We have asked the Commission officials to bar Modiji from further campaigning this election."

Taking a jibe at Congress President Rahul Gandhi, Modi at a rally in Uttar Pradesh's Pratapgarh on Saturday had said: "Your father was termed 'Mr Clean' by his courtiers, but his life ended as 'bhrashtachari' (corrupt) No. 1."