Notice issued to Rahul on his British citizenship 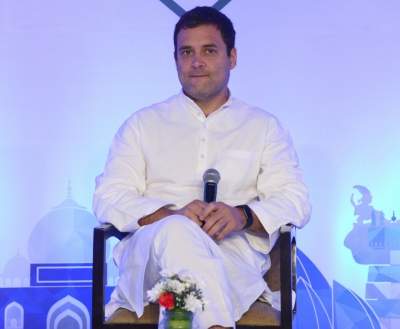 New Delhi (IANS) The Ministry of Home Affairs (MHA) has issued a notice to Congress President Rahul Gandhi to clarify his nationality within a fortnight after Bharatiya Janata Party (BJP) MP Subramanian Swamy alleged that he is a British national.

The MHA in a letter dated April 29, said that Gandhi has declared his nationality as British in an annual return filed by a British company named Backops Ltd.

The Ministry sought the Congress President's response over the issue within 14 days.

"You are requested to intimate the factual position in the matter to this Ministry within a fortnight of the receipt of this communication," the letter read.

The BJP had raised the issue earlier in April, citing the British company's document to allege that Gandhi is a British national. BJP MP Swamy cited the same British company document.

Swamy in his representation before the Home Ministry alleged that Gandhi served as one of the Directors and Secretary of the British firm Backops Ltd, which is registered in the UK since 2003, with address 51 Southgate Street, Winchester, Hampshire.

"It has been further brought out in the complaint that in the company's annual returns filed on October 10, 2005 and October 31, 2006, your (Rahul Gandhi) date of birth has been given as June 19, 1970 and that you had declared your nationality as British," the letter wrote.

The letter also stated that in the dissolution application dated February 17, 2009 of the British firm, Gandhi's nationality has been mentioned as British.

Swamy had filed the original complaint to Union Home Minister Rajnath Singh on September 21, 2017 asking him to take "necessary steps to see if this prima facie evidence is rebuttable, and if not, order that Rahul Gandhi be stripped of his citizenship, and his membership of the Lok Sabha, forthwith".

In his complaint, Swamy had then alleged that Gandhi held 65 per cent of of the total shares issued by the British firm.

Referring to Article 9 of the Indian Constitution, Swamy had alleged that every citizen of India is barred from voluntarily acquiring citizenship of any foreign state. While the UK permits dual citizenship, India "emphatically" does not, the MP had mentioned in his complaint.

Swamy also cited Article 18 that he said prohibits an Indian citizen from accepting even foreign tities. "Hence, Rahul Gandhi has, prime facie, committed an unconstitutional act and therefore liable to be stripped of his citizenship and membership of the Lok Sabha.

"No member of parliament can incorporate a company abroad without prior permission under the existing laws and without declaring the same in his nomination form as candidate for election to Parliament. FCRA (Foreign Contribution Regulation Act) is one such law," Swamy said.