72 constituencies go to polls in fourth phase on Monday 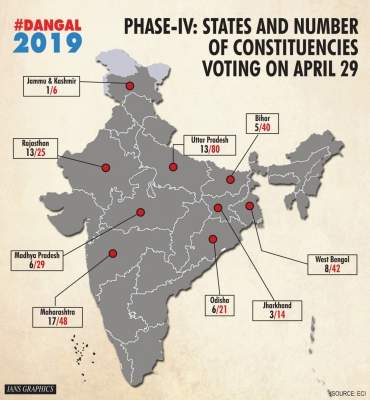 New Delhi (IANS) A total of 72 Lok Sabha constituencies spread over nine states, mostly in Hindi heartland, will go to polls in the fourth phase of the elections on Monday.

An estimated 12.79 crore electorate will be eligible to exercise their franchise in 13 seats each in Rajasthan and Uttar Pradesh, five in Bihar, eight in West Bengal, three in Jharkhand, six in Madhya Pradesh, 17 in Maharashtra and six in Odisha.

Polling will also be held in the second of the three phases in Jammu and Kashmir's troubled Anantnag constituency.

In the fourth phase, the BJP will be defending 45 of the seats it won in the 2014 Lok Sabha battle -- 13 in Rajasthan, 12 in Uttar Pradesh, five in Madhya Pradesh, three in Bihar, three in Jharkhand, eight in Maharashtra and one in West Bengal.

In Maharashtra, all the remaining nine were won by the Shiv Sena while in Bihar, the remaining two seats were bagged by BJP's ally Lok Janshakti Party. The Congress got only two -- one in Madhya Pradesh and one in West Bengal.

Among other parties, the Biju Janata Dal won all six in Odisha, the Trinamool Congress six in West Bengal and the Samawadi Party one in Uttar Pradesh.

With the end of the fourth round of polling, over 61 crore of the electorate would have taken part in the democratic exercise, the largest in the world.

The fourth round will also mark an end to staggered voting in Odisha and Maharashtra.

Odisha is also electing its state Assembly. In Madhya Pradesh, the VIP Chhindwara Assembly constituency will go the polls, with Chief Minister Kamal Nath in the race to become a member of the legislature.

Campaigning for Monday's polling ended on Saturday evening amid allegations and counter-allegations bordering on personal affairs, making it one of the most bitterly fought elections in the country.

The BJP and its allies in the National Democratic Alliance (NDA) led by Prime Minister Narendra Modi are determined to secure a second term while a divided opposition is aiming to end his five years in power.

Giriraj Singh, for whom Bihar Chief Minister Nitish Kumar campaigned, is pitted against former JNU student leader Kanhaiya Kumar of the CPI in Begusarai. Kanhaiya Kumar's candidature has virtually overshadowed the RJD contestant in the seat.

Moon Moon Sen of the Trinamool Congress has taken on Supriyo, Urmila Matondkar is contesting from Mumbai North and Baijyant Panda of the Bharatiya Janata Party in Kendrapara in Odisha are among the key candidates on Monday.

The next three rounds of the Lok Sabha battle will conclude on May 19 and the vote count across the country will be taken up on May 23.