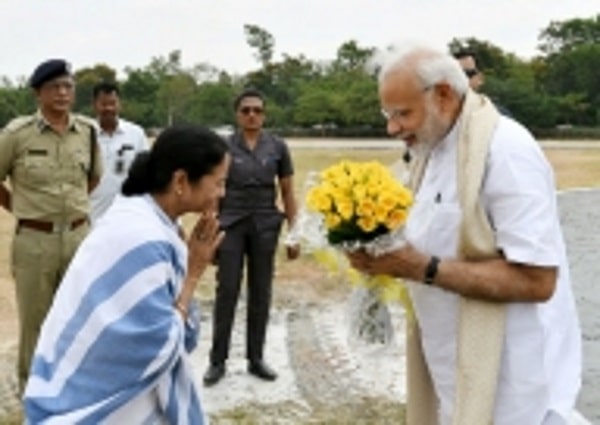 In a candid conversation with actor Akshay Kumar, Modi added that the revelation might harm him in the ongoing Lok Sabha elections.

He said that Bangladesh Prime Minister Sheikh Hasina used to send him special sweets every year from Dhaka. "When Mamata Didi came to know about it, she also started sending me Bengali sweets on one or two occasions every year."

The Prime Minister said that he had good relations with his political opponents like senior Congress leader Ghulam Nabi Azad.

The "candid and completely non-political" interview was telecast a day after the third phase of the staggered Lok Sabha elections.

Hours before its telecast, Akshay Kumar announced on Twitter that he would soon be engaging in a chat to help viewers "discover" some interesting facts about Prime Minister Modi.

To Kumar's question whether he had donated the entire amount he got as salary during his tenure as Gujarat Chief Minister before he moved to Delhi, Modi said: "This is not the complete truth. I wanted to do so, but on the advice of some officials under me, I only contributed Rs 21 lakh. I asked the officials to spend the money on the education of the children of junior employees in the Secretariat."

Asked if he ever felt angry, Modi said: "If I said that I don't get angry, people would be surprised.

"Anger is a part of life of every human being. When I was about 18-20 years old, I was told that bad habits are hurdles in personal growth. My anger was one such bad habit. I was the Chief Minister for a long time. Now I am the Prime Minister, but there was not a single occasion when I got angry on anyone.

"I am strict, but I don't believe in humiliating others. I encourage people. I lend them a helping hand... I learn and also teach. I make a team. There may be anger inside me but I don't express it," the Prime Minister told the actor at his Lok Kalyan Marg residence in New Delhi.

"If anybody says that I force people to work, he hasn't fully understood me. It is true that people connected with me have to work more, but I never force anyone. I develop a work culture because I also work very hard," he said.

He said he had never thought of becoming the Prime Minister because there was nothing in his family that would make him imagine anything like that.

"Common people don't dream of such things. Such ideas only come to people with a certain background. But my family background was such where had I got a good job, my mother would have distributed sweets to the neighbours. We never thought beyond that. We never saw anything outside our village.

"This journey just started and the country accepted me. Responsibilities also came to me automatically. In my view, this (becoming Prime Minister) is unnatural because my life and world does not fit in the current political atmosphere.

"I always wonder why the country loves me and gives me so much."

Modi said that there was a time, when he believed he would either become a 'sanyasi' (hermit) or join the Army.

At the mention of mangoes, Modi got nostalgic and told the actor about how much he enjoyed the fruit as a child. But as the Prime Minister now, he said, he had to keep a tab on his diet.

The PM also spoke to Akshay Kumar about his daily routine, his responsibilities and his sleep schedule.