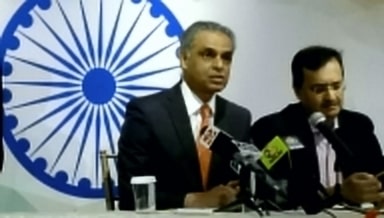 United Nations(By Arul Louis - IANS): India will be focusing on a multilateral agenda at the high-level UN General Assembly (UNGA) session that begins on Tuesday and let Pakistan be a "one-trick pony" on Kashmir if it wants to, India's Permanent Representative Syed Akbaruddin has said.

The UN works best on the basis of multilateralism and "India's positions based on partnerships get a great resonance", he said on Sunday at a news conference while replying to a reporter's query about the possibility of Pakistan raising Kashmir at the UNGA.

He said: "If somebody else would like to be a one-trick pony, it is for them to regurgitate that act. We've handled this act many times in the past and are confident we'll do so again."

"Solo players in a multilateral context have neither a past nor a future" and get "no resonance in such matters", he added.

Pakistan Foreign Minister Shah Mehmood Qureshi has said that Islamabad would bring up Kashmir at the UNGA and give "unequivocal support to the cause", Radio Pakistan has reported.

Pakistan has been raising Kashmir at all UN forums, regardless of the topic of the meetings, but no other country has joined it in making it an issue or even talking about it.

During the 2017 UNGA meeting, Pakistani zeal produced a major embarrassment when its Permanent Representative Maleeha Lodhi was caught out trying to pass off a picture of a wounded Palestinian girl as a Kashmiri.

Akbaruddin said that even when India talks about terrorism, it does not treat it as just a bilateral issue but deals with it in the international context of havoc it wreaks around the world, for example the Boko Haram in Africa, and terrorist groups elsewhere.

Fresh from India's launch of the world's biggest public health insurance programme, Health Minister Jagat Prakash Nadda will be joining the Indian delegation to represent the country at a high-level event on Ending Tuberculosis and on Non-Communicable Diseases.

Sushma Swaraj is scheduled to address the UNGA on Saturday at the morning session scheduled to start at 9 a.m. Listed as the fifth speaker, she will likely speak around 7.15 p.m. (India time).

Qureshi's speech is set for Saturday's afternoon session, which will give him an opportunity to react to Sushma Swaraj's address.

If he raises issues relating to India, the nation would have a right of reply which could take place towards the end of that session or Monday's session.

Customarily a junior diplomat exercises the right of reply at the UNGA high-level meeting.