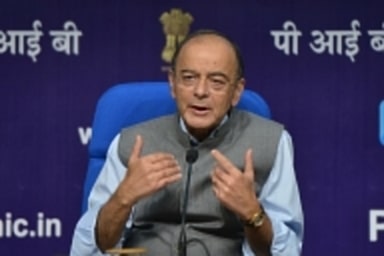 New Delhi (IANS): The slugfest over the Rafale deal continued on Sunday with Union Finance Minister Arun Jaitley citing conflicting media reports on Francois Hollande's claims regarding a private firm becoming an as offset partner in the jet deal at the instance of Modi government and asserting that there was "no partnership as suggested by the former French President".

Riding on Hollande's remark to French website Mediapart that that the Indian government had proposed choosing a private firm as an offset partner, the opposition has been gunning for the Bharatiya Janata Party (BJP) regime with Congress president Rahul Gandhi even claiming that the former French President had called Prime Minister Narendra Modi a "thief".

While both the Defence Ministry and Law Minister Ravi Shankar Prasad have maintained that the Indian government had no role in the choice of the offset partner, Jaitley took to social media to reiterate the assertions and pointed to Hollande's "contrasting remarks".

"A controversy is sought to be created on the basis of a statement made by Hollande, that the Reliance Defence 'partnership' with Dassault Aviation was entered at the suggestion of the Indian GOvernment.

"In a subsequent statement, the former President has sought to suggest that Reliance Defence emerged on the scene after the agreement with the Indian Government was entered into. He has, in a subsequent statement, said that he is 'not aware' if the government ever lobbied for Reliance Defence and that the partners chose themselves'. Truth cannot have two versions," wrote Jaitley in a blogpost.

"Without commenting on the correctness or otherwise of a controversy in the French media, it may be mentioned that the former French President Hollande, is countering statement made against him with regard to a conflict of interest in his dealings with the Reliance Defence.

"The accuracy of the statements made by the individuals may be questioned but circumstances never lie," said Jaitley, adding that "there is no 'partnership', as suggested by the former President with regard to the 36 Rafale aircraft".

Contending that it was a "government to government agreement" with no manufacturing is to be done in India, Jaitley said it was "erroneous for anybody to suggest that there is a partnership in the supply of the 36 Rafale aircraft".

Citing a media report that quoted Hollande as saying that "France did not choose Reliance in any way", Jaitley said: "His (Hollande) second statement in Montreal, Canada, to AFP makes the veracity of his first statement even more questionable".

"'The partners (Dassault and Reliance) selected themselves' as former President Hollande now says. This contradicts his first questionable statement which the French government and Dassault have denied. The facts contradict the same," he said.

The AFP report claims Hollande as saying that he was "unaware" about if India had put pressure on Reliance and Dassault to work together and said "only Dassault can comment on this".

Jaitley reiterated that neither the French or the Indian Government has any say in selecting the offset partner and targeted Gandhi over the issue.

The Congress Party's official handle on 31.8.2018 had carried the tweet of one of its leader "It is evident that Anil Ambani bribed President Hollande through his actor-partner to get the Dassault partnership".

"For the Congress Party to allege that a former President had been bribed by an Indian business group and then use him as a primary witness, particularly when he is facing criticism for an alleged conflict of interest within his own country.

"Rahul Gandhi has made an absurd suggestion that the interest of Indian soldiers has been compromised with. By whom? The UPA which delayed the acquisition which would have added to the Military's combat ability or the NDA which expedited the same at a lower cost," he added.

Notwithstanding the contradictory report by the AFP, an India media house (NDTV) has reported that Hollande's office has reiterated that the former French President stands by his statement that the Indian government proposed Reliance Defence as the India partner for the 36 Rafale jet deal.