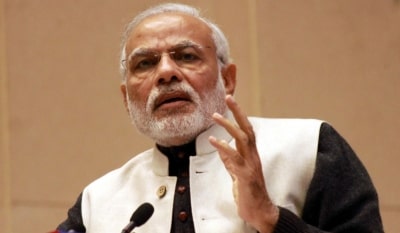 Dehradun (IANS) Prime Minister Narendra Modi on Friday launched a scathing attack on Congress and the Gandhi family claiming they were involved in all the corruption scandals rocking between "the earth and the sky" and called for "punishing" the main opposition in the election.

"Be it Bofors or helicopters, you will not find any arms deal, where there is no news about the commission being taken by Congress," he said at an election rally here.

Referring to new "evidence" and chargesheet in the scrapped AgustaWestland helicopter deal, he said the names of Ahmed Patel and the Gandhi family have now surfaced. "There is one 'AP' (Ahmed Patel) and there is other 'Fam' (family). You have all heard the name of Ahmed Patel. You tell me with which family Ahmed Patel is closely associated. Who got the commission in helicopters?" he asked.

The Prime Minister said Congress leaders have not left any place where they have not indulged in corruption. They even did not spare the armed forces, he said. "From earth to sky and from Bofors to helicopters, they are involved in all corruption scandals," he said.

He said the Congress leaders were "exposed" after the government succeeded in bringing back British national Christian Michel, the alleged middleman in the helicopter deal, from Dubai for interrogation by the Enforcement Directorate (ED).

Modi said all these people are now trying to evade jail terms through bails. "There was a time no one could dare to touch them (the helicopter deal accused) at airports. Even vehicles will take them right up to the aircraft. Everybody will salute them. But now they are out on bail. They want to escape from jail through various maneuvering," Modi said.

Besides corruption, Modi said Congress is also trying to appease Pakistan and anti-nationals. He referred to the Congress manifesto, saying the party was trying to protect anti-nationals by promising to scrap the Armed Forces (Special Powers) Act (AFSPA).

"if we don't protect our forces, then no mother will send her son for the highest sacrifice of his life for the country," Modi said, charging the Congress with siding with separatists and terrorists.

The armed forces are in Kashmir because they are being protected, he said. "We are bound to give protection to our armed forces," he said. "Politics is being played for getting votes. This is a sin. To hell with such politics," he said.

"Anybody can file a fake case against the armed forces if AFSPA is revoked," he said. He also slammed Congress saying it wants to hold talks with all those who take money from Pakistan and throw stones at armed forces. "Will you like to see such faces?" he asked. He said only he can provide all freedom to the armed forces.

"For this, you need to punish Congress. Should Congress be punished or not," he asked.

He also said all those people who work against the interests of the country must face sedition charges. He lambasted Congress for advocating the repealing of the sedition laws.

Referring to the IAF's air stikes at Balakot in Pakistan, he said the 'chowkidar' launched strikes inside Pakistan to destroy terrorists. "Now you decide you need 'chowkidar' or those who extend help to the patrons of terrorists," he said. The divisive elements are happy with the manifesto of Congress, he said. "Even people in Pakistan are happy," he said.

He also criticized the idea of advocating a prime minister for J&K in the country.

Without naming Sam Pitroda, Modi called him a 'guru' of the Gandhi family from the US who wanted their victory in the election. "But his man has now started demeaning the middle class by calling them as greedy and selfish. This reflects the conspiracy of Congress," he said.