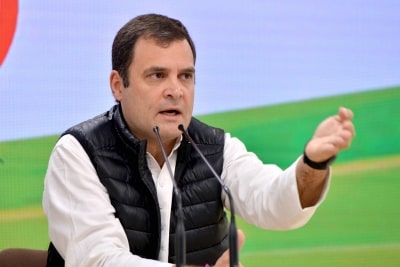 New Delhi (IANS) The Congress party has sought Prime Minister Narendra Modi's apology for his remarks over party chief Rahul Gandhi choosing to contest also from Wayanad in Kerala as his second seat apparently because the Congress is "scared" that Hindus will punish them for "Hindu terror" remarks and therefore running away to minority-dominated seat.

Surjewala said Modi has committed a "corrupt practice" under Section 123 of the Representation of People's Act besides violating the dignity of the office he holds and every other yardstick that is necessary and impeccable in public life.

Party general secretary K.C. Venugopal said that Modi should apologise to the people of Wayanad for his "most condemnable and divisive" statement on candidature of Gandhi.

"By alleging that Rahul Gandhi is contesting form Wayanad on account of residents of a particular religion living there is a disgrace to the high office PM is holding," Venugopal said in a statement.

He said Wayanad reflects the composite culture of various communities and religions who thrive and live together and was land of "lion of Kerala", Kerala Varma Pazhassi Raja who had fought against the British. "Prime Minister was not only disrespecting the people of Wayanad but also insulted the freedom movement," he said, adding that Modi "insulted the entire Southern India".

Surjewala said Modi is frustrated at his imminent defeat in the elections.

"Looking at the imminent defeat, a frustrated and flustered Prime Minister has shed all sense of responsibility of the high office he holds, and broken every constitutional norm and every norm of the public life that a person holding such a high office should uphold by alleging that Rahul Gandhi is contesting Wayanad seat as people of a particular religion live there," Surjewala said.

He said Modi must understand that this country thrives on its all encompassing behaviour.

"The Prime Minister must understand that caste, creed, religion, way of life, culture, language, looks and colour of skin are not considerations in our society to differentiate between men and men or women and women. PM Modi has no sense of history, he has no sense of geography, he also has no knowledge of the struggle of Independence and he does not understand the composite culture of India," he said.

Surjewala said Modi does not know that Wayanad is famous for struggle for freedom against the British by the ruler of Kottayam Royal Dynasty, who not only fought the Britishers but also waged a guerrilla war defeating the British on multiple occasions till he sacrificed himself for India.

"Does the Prime Minister even know that Wayanad has nearly 50 per cent Hindu population besides the population of backwards, Scheduled Tribes, Dalits and of many-many other religions where Christians are about 20-21 per cent and Muslims are about 28 per cent? So, it is an ideal ground of combination of various communities and religions who thrive together and live together," he said.

Modi had said at an election rally at Wardha in Maharashtra that the Congress is running scared that the Hindus will punish them now with the recent court verdict.

He said the Congress lacks courage to stand in Hindu-dominated constituencies and is running around other minority-dominated seats for elections, in an obvious reference to Gandhi's plans to contest from Wayanad in Kerala apart from his traditional seat of Amethi.

Previous ArticleIndependents no longer the flavour of Jharkhand's voters
Next Article Sensex jumps over 100 pts, Nifty crosses 11,700
Must Read