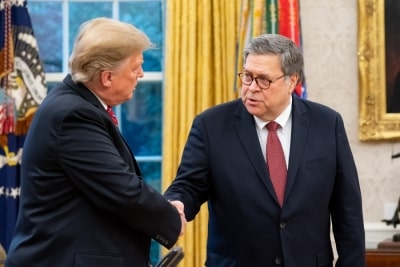 New York (IANS) Special Counsel Robert Mueller who investigated Russian interference in US President Donald Trump's 2016 election has concluded that there was no collusion between him or his campaign and Moscow, according to a summary of the report released by Attorney General William Barr.

While the probe found that Moscow had meddled in the 2016 election, the "investigation did not establish that members of the Trump Campaign conspired or coordinated with the Russian government in its election interference activities", Barr said in the summary he said to Congress on Sunday afternoon.

Trump declared that it was a complete exoneration and said the probe was an "illegal take down that failed".

On another key matter, if Trump had tried to obstruct justice by interfering with investigations into Russian interference, Barr's summary of Mueller's report was less certain. He said that in this regard Mueller's "report does not conclude that the President committed a crime, it also does not exonerate him."

He added that he and Deputy Attorney General Rod Rosenstein found the evidence "not sufficient to establish that the President committed an obstruction-of-justice offence".

"While this report does not conclude that the president committed a crime, it also does not exonerate him", Barr's summary said.

The summary of the report was unlikely to quell the controversy over Russia's interference and Trump campaign's role that has divided the nation.

The White House and Trump' supporters exulted that it was an exoneration of the president, whose legitimacy was attacked for two years, but his opponents were questioning if the wording was ambiguous.

"The findings of the Department of Justice are a total and complete exoneration of the President of the US", his Spokesperson Sarah Huckabee Sanders said.

However, the Democrat head of the House Judiciary Committee, Jerrold Nadler, asserted that there were "very concerning discrepancies" and "Mueller did not exonerate the President". He added that he would be calling Barr to testify before the Congressional panel.

The Democrats demanded the entire report be published and threatened to use Congressional powers to acquire the full report and supporting documents. Legally, the Special Counsel's report is submitted to the attorney general who has the power to withhold it or release only parts of it. Trump has also supported its release.

Before deciding its release Barr will have to determine if there are any matters of national security that has to be blacked out. Mueller's investigation conducted away from public view interviewed more than 500 witnesses, executed 500 search warrants and issued 2,800 subpoenas (demands of appearance of production of documents) over 22 months.

Five important members of the Trump team, including campaign Chairman Paul Manafort, his personal lawyer Michael Cohen and former Trump National Security Adviser Michael Flynn, have been convicted as a result of the Mueller probe on various charges, some of lying during investigations and some like tax and financial fraud unrelated to the Russian link.

The Mueller investigation was definite that there was Russian interference in the election, but in an insidious and indirect manner.

"The first involved attempts by a Russian organisation, the Internet Research Agency (IRA), to conduct disinformation and social media operations in the US designed to sow social discord", his summary said.

Barr noted that Mueller brought criminal charges against several Russian citizens and entities in connection with these activities.