Will give clean government, people believe my party: Bhaichung Bhutia 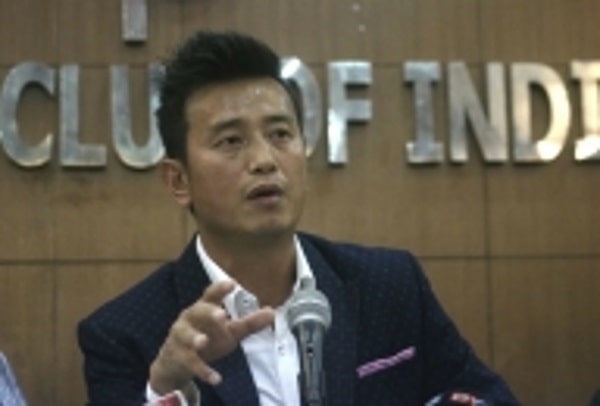 Gangtok (IANS) Unfazed by recent desertions from his fledgling party, football icon-turned-politician Bhaichung Bhutia exudes confidence that the Hamro Sikkim Party (HSP) would give a "new" and "clean" government if voted to power in the Himalayan state.

While not ruling out the option of future alliances, the HSP Working President and former India football captain says that as of now, his party would contest the upcoming elections alone to the sole Lok Sabha seat and all the 32 Assembly seats in the state.

In a freewheeling interview with IANS, Bhutia spoke on his party's agenda, and attacked the state's Pawan Chamling government on issues like corruption, while criticising some headline welfare policies unveiled by the regime.

Bhutia said the HSP was the answer to Sikkim people's craving for a party with credibility.

"We are going to give a new Sikkim and clean Sikkim. We are a young party and we have got credible people. This is what the people of Sikkim want," he said.

Scotching speculation that the HSP was holding talks with the Bharatiya Janata Party (BJP) and some regional parties to take on Chamling's Sikkim Democratic Front (SDF), that has been in power since 1994, Bhutia said: "We are going it alone in this election. One or two parties, if they believe in our ideology, we are ready to take them (in). But at the moment, we are going with 32 candidates for the Assembly and one for the Lok Sabha."

On two HSP founding members and working presidents - R.B. Subba and K.N. Uprety - crossing over to the SDF, Bhutia said his party's credibility would be stronger and better without them.

"It is not at all a major challenge... After they left, the party's credibility has gone up. Now when we say 'clean, corruption free Sikkim', people believe us."

Bhutia stressed on development being the sole agenda of the party, also taking potshots at the Chamling government.

"We'll go completely on development. Because Sikkim, in 25 years, in terms of development, has been lacking," he said promising good roads, improvement in the health sector, 24-hour electricity and drinking water to "almost al the villages" if his party is chosen by the people.

Calling Sikkim "the most corrupt state politically" in the country, the 42-year-old Bhutia alleged graft in the hydro projects.

"Sikkim is the most corrupt state... It is highly corrupted politically," he said.

Bhutia was also not impressed with the state government's "success" in organic farming, alleging it was only done for the Chamling's "marketing purposes".

Incidentally, Chamling received the prestigious Future Policy Gold Award at the UN Food and Agricultural Organisation headquarters in Rome last October for turning Sikkim into a "100 per cent organic state".

While supporting the concept of organic farming, Bhutia quoted the state government's data saying organic agricultural land has gone down 50 per cent in the current regime.

"We have 20 lakh tourists visiting Sikkim and your food production has gone down 65 per cent. There is huge gap between just declaring it, and then actually realising it. He (Chamling) needs to increase agricultural land which has gone down by 50 per cent."

Bhutia said his party would ensure sustainable development by taking good care of farmers through measures like minimum guaranteed price and subsidies.

Bhutia also took a dig at the 'One family, one job' scheme announced by Chamling, saying the youth were "disappointed" at being given jobs for only 89 days.

"Don't make people of Sikkim (look like) beggars. Today's youth of Sikkim are educated and qualified and you are giving them jobs of 'safai karmacharis' (sweepers) and village guards.

"And when you are giving jobs, give secured jobs and not just for 89 days."

While launching the scheme in January, Chamling said budget allocations have been made for 89 days in the current financial year for paying emoluments to the new recruits, and fresh provisions would be made in the next financial year.

This is Bhutia's second innings in politics. He earlier contested the 2014 Lok Sabha and 2016 Assembly elections in West Bengal as a Trinamool Congress candidate - but bit the dust on both occasions.

"I don't live or work in Bengal, so just being a star and being up there doesn't work. So from Bengal it was more from top, getting nominated as candidate. In Sikkim, this is my own party. In politics if you can't be with your people and help them, then I don't think it makes any sense to do politics," he added.

Previous ArticleBJP to ally with AJSU in Jharkhand, Modi to contest from Varanasi
Next Article Pakistan to upgrade group of banned outfits to 'high risk'
Must Read