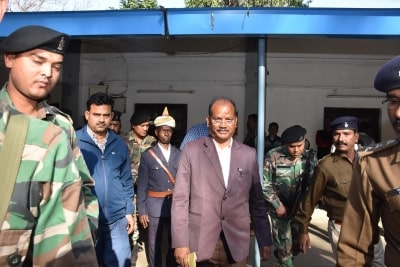 Ranchi (IANS) The Jharkhand Assembly speaker here on Wednesday dismissed the petition seeking disqualification of six legislators who had defected to the ruling Bharatiya Janata Party (BJP) from the Jharkhand Vikas Morcha-Prajatantrik (JVM-P).

Speaker Dinesh Oraon delivered his judgment almost three and half years after the case was filed by JVM-P President Babulal Marandi. The speaker accepted the defected JVM-P legislators plea that the party was merged with the BJP in January 2015.

The hearing in the anti-defection case was concluded on December 12. The speaker had reserved the judgment and delivered it on Wednesday.

Expressing unhappiness, the JVM-P said it would move the court against the judgment.

In 2014 Assembly polls held in November and December, the BJP had won 37 seats and it's ally, the All Jharkhand Students Union (AJSU), five seats.

To end dependence on the ally for majority in the 82-member Assembly, the BJP lured six of the eight JVM-P legislators. They joined the BJP in January 2015.

During the argument, the JVM-P legislators had pleaded the anti-defection law did not apply on them as the party was merged with the BJP. The speaker court accepted the plea and dismissed the petition.