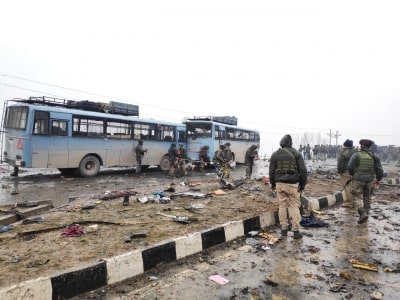 Srinagar (IANS) The toll from Thursday's terror attack on a Central Reserve Police Force (CRPF) convoy in Jammu and Kashmir rose to 45 as two more troopers succumbed to their injuries, officials said on Friday.

Besides, 38 others were wounded in the worst-ever terror attack in Jammu and Kashmir.

The attack took place around 3.15 p.m. on Thursday when a 'Fidayeen' bomber belonging to the Jaish-e-Muhammad (JeM) terror outfit rammed an explosive-laden SUV into a bus carrying CRPF troopers in Lethpora area of Pulwama district on the Srinagar-Jammu Highway, officials said.

"None among the 44 CRPF men travelling in the bus that took the full impact of the suicide bombing survived," a CRPF official said.

"An injured person in another bus has also succumbed taking the death toll to 45," he added.

The official said the injured (38) CRPF men are being treated in the Army base hospital in Badamibagh cantonment area of Srinagar.

The CRPF convoy of 78 vehicles was coming from Jammu to Srinagar. The convoy carried 2,547 CRPF personnel.

The attack happened even as an intelligence input had warned of its the possibility 48 hours earlier.

The audacious attack, the worst-ever since armed insurgency started in the state in 1989, was carried out by the JeM.

The intelligence input had said: "Chatter inputs reveal that JeM outfit has hinted to carry out IED attacks along the routes of security forces across Jammu and Kashmir. A video uploaded by the outfit has also been shared with all concerned. It is as such suggested that security forces need to be put on alert to thwart any such attempt by terrorists."

Informed sources said the intelligence input was shared with all security forces in Jammu and Kashmir.

The video that was uploaded along with the threat message showed a truck carrying troops in Somalia blown up in a powerful improvised explosive device (IED) blast. In the message, the JeM had warned of a similar type of blast.

A video released by the JeM after the attack identified the suicide bomber as Adil Ahmad Dar alias Waqas Commando, belonging to Kakapora town of Pulwama district.

Police sources said the bomber rammed his explosive-laden SUV into the CRPF bus and is believed to have been killed in the explosion.

There is, however, no official confirmation about the bomber's death .

The explosion was so massive that its sound was heard 10 km away.

Modi would chair a meeting of the Cabinet Committee on Security (CCS) at 9.15 a.m. in Delhi on Friday.

Home Minister Rajnath Singh, accompanied by Union Home Secretary and other senior officers of the ministry, is likely to arrive here on Friday.

A 12-member team of national Investigation agency (NIA) and another team of t he national security guards (NSG) are also expected to arrive here to assist the police in the investigation of the terror strike.