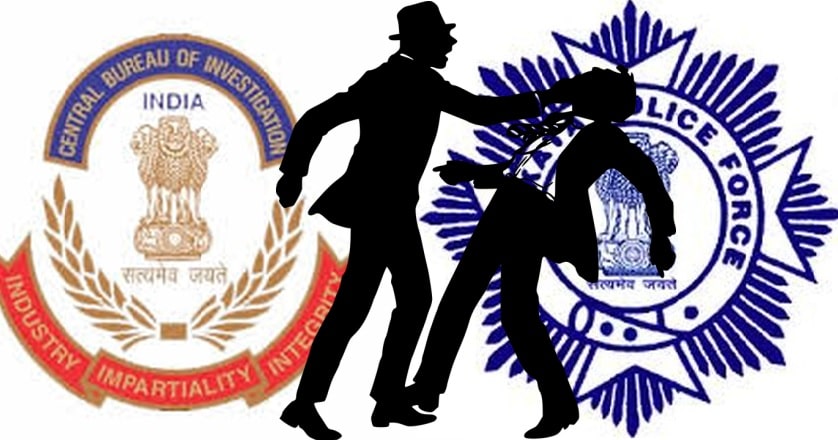 Kolkata (IANS) There was a high drama in front of Kolkata police commissioner Rajeev Kumar's official residence on Loudon Street on Sunday as a group CBI officers approached the house, but they were stopped by city police personnel, who also forcibly took the federal probe agency officers to a police station.

The Central Bureau of Investigation officers, led by its deputy superintendent Tathagata Bardhan, were spotted near Kumar's residence around evening, a day after sources in the federal probe agency said they were "looking for" him in connection with its probe into ponzi scheme scam case.

The sources had even claimed that Kumar, a 1989 batch IPS officer, may be arrested in the case if he does not respond to the CBI's summons.

However, on Sunday, within a few minutes of the CBI officers' arrival, some senior Kolkata police officers rushed near the residence and were seen having animated discussions with the CBI team.

A little later, another CBI team reached the spot in another car, while some officers of the probe agency went to the Park Street police station, apparently carrying a letter.

Bardhan, after waiting outside Kumar's residence left for some unknown destination after some time, but said a categoric "no" when asked if they were retreating from the spot.

Meanwhile, a strong city police team was seen near the CBI's state headquarters at CGO Complex in the Salt Lake area.

The drama intensified near Kumar's residence around 7 pm, as three deputy commissioners of city police and some officers of the anti-rowdy section reached the spot.

The discussions between the city police officers and those from the CBI led to some scuffle, following which the local cops were seen bundling the probe agency men into three vehicles which headed for the Shakespeare police station.

Trinamool spokesperson and Rajya Sabha MP Derek O'Brien wondered whether the BJP was planning a "constitutional coup" and said his party would raise the matter in Parliament on Monday.

"Our demand in #Parliament on Mon. Modi has to go. We are reaching out and sharing this with all Oppn parties who want to #SaveDemocracy," O'Brien tweeted.