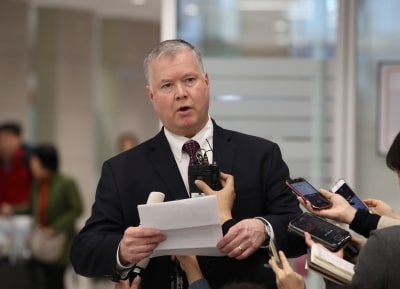 Washington (IANS) North Korea has pledged to destroy all its nuclear material enrichment facilities, the US special envoy has said.

Stephen Biegun said he planned to discuss "corresponding measures" the US can take in return for the country's denuclearisation, the BBC reported on Friday.

The US would first however need "complete understanding" of the country's weapons programmes.

Speaking in the Oval Office, the President said he would soon announce the date and location of a planned summit with North Korea's Kim Jong-un.

The pair met in Singapore last year, the first meeting between a sitting US president and a North Korean leader.

In a speech at Stanford University in California, Biegun said North Korea had made the pledge to South Korea and to US Secretary of State Mike Pompeo.

But the US needed to agree on "expert access and monitoring mechanisms" of North Korea's nuclear programme first, he said.

"President Trump is ready to end this war," he said. "We're not going to invade North Korea. We are not seeking to topple the regime."

However, he reiterated the US would not lift sanctions until denuclearisation was complete, and said Washington had "contingencies" in case diplomatic efforts failed again.

Biegun will meet his North Korean counterpart in South Korea on February 3 for talks.

North Korea has complained about continued US sanctions and the slow pace of change in their relationship.

Kim Jong-un has strived to improve relations with South Korea in the past year, seeking a formal end to the Korean War, which ended with a truce in 1953.

The two Koreas marched under the same flag at the 2018 Pyeongchang Winter Olympics, and Kim even sent puppies to South Korea's dog-loving President Moon Jae-in as a peace offering.

But there are still sceptics on the Korean peninsula and in the US.

US intelligence chiefs presented the annual Worldwide Threat Assessment report to the US Senate earlier this week, which assessed that North Korea is "unlikely to give up" its weapons programme.

The report also said Iran was not developing nuclear weapons, as the Trump administration has said, prompting a tweet from the president telling the intelligence heads to "go back to school".