Faith of the people of the country has increased on the government: Raghubar 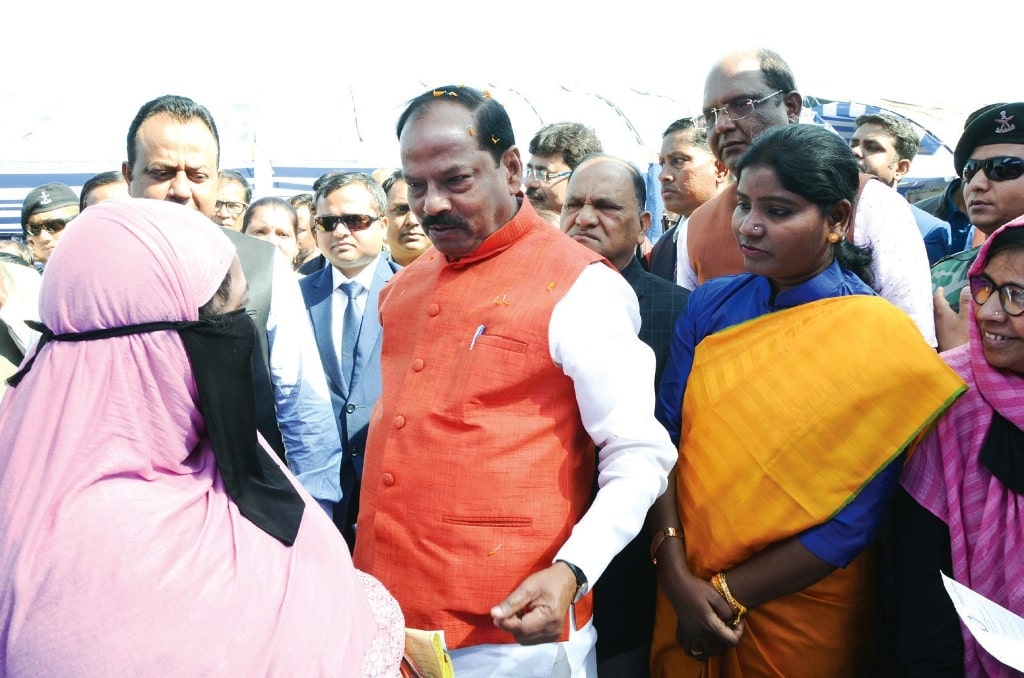 Ranchi: Jharkhand Chief Minister Raghubar Das said that after the first time since the creation of the state all the schemes in a  transparent manner has reached to the people standing in the last row of the society. Addressing the people while addressing the Urban Prosperity cum beneficiary meet 2019 at the Harmu grounds here he said that since 67 years of Independence of the nation no one worried about the poor but the present central and the state government framed all the policies keeping in mind the all round development of the villages the poor and the farmers and executed them on the ground.

He said that before 2014 the poor of the state and the country were in disarray but things have changed now as after the government
under Prime Minister Modi a change has been brought in the thought process of the poor and the faith of the people of the state
and the nation has increased on the government. He said that the government will provide homes to all the homeless in the urban and the rural areas who do not have their own homes under PMAY by 2020.

Mr. Das said that Prime Minister Narendra Modi has set a target to provide homes to the homeless by 2022 across the nation and the state government was also working in coordination with the central government to provide homes under the schemes. The Chief Minister said that in the last four years the state government has provided a corruption-free administration and role of the middlemen in projects has been removed. He said that before 2014 in all the works the middlemen were active but now the money to the beneficiaries directly reach to their accounts through the DBT. He said that the gap between the people and the government has reduced which has resulted in positivity.

Mr. Das said that in all the districts of the state rapid development has taken place and construction of roads flyovers drains schools and hospitals have gathered pace. He said that the Haj House in Ranchi is being built with an investment of Rs 4 crore and it would be ready by March 2019. He said that scam had also taken in the construction of Haj house but despite that new Haj house is being built and also the construction of Ravindra Bhawan and own building of RMC was on. He said that the state government has risen above the affiliation of the case and community and was working for the all round development of all the community due to which many milestones have been set in the last four years and all the sectors have registered positive growth and people were getting the benefit of the welfare scheme.

He said that under the Ujjwala Yojana 25 lakh families have been provided LPG connection while another 15 lakh families will also be given the same sooner. Adding further he said that in the entire state Beti Padhao Beti Bachao movement has been made a movement and the government was committed for the all round development as part of which from January 24 the Mukhyamantri Sukanya Yojana will be launched in the state . He asked the people not to difference between sons and daughters and asked them to send the girls to school.

Mr Das also expressed concern over female feticide and warned that doctors indulging in such acts will be sent to jail. The Chief Minister said that his government was dedicated to the poor and since he too was from a very humble background therefore he understood the pain of poverty and was committed to wipe out poverty from the state. He said that the government was committed for the empowerment of the women and was the first state in the country which sent 24 women to Israel for learning modern agriculture techniques. He said that women will have an important role to play in the development of the state and said that it was a priority of the state government to link them with agriculture animal husbandry and other small works to make them stand on their feet while women self-help groups are also being provided bank linkages.

He said that the government should be such which thinks about the poor and works for their betterment and the central and the state government were working with the same thought and said that so far after his government came into power 1.26 crore bank accounts have been opened. The Chief Minister asked the people to stay alert from such forces which are  trying to mislead them who just use the people for vote bank. He said that for the first time under the Prime Minister Narendra Modi works have been done in the welfare of the poor tribals dalits etc as Sabka Saath Sabka Vikas in the mantra of the government.