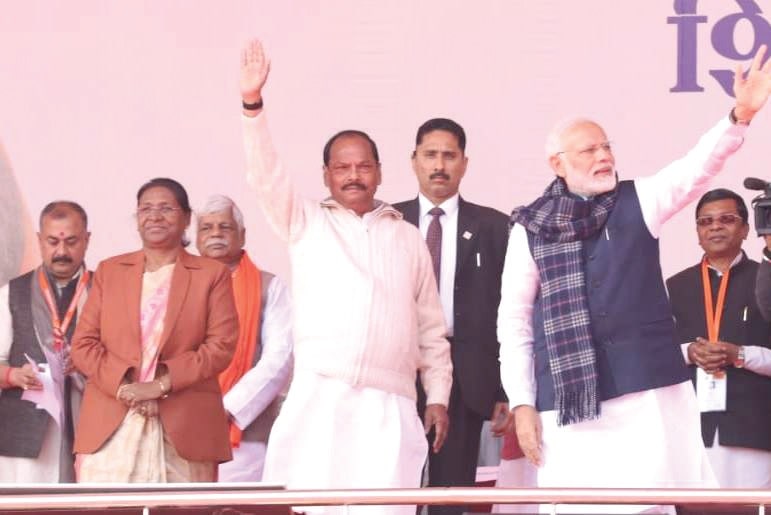 Daltonganj: Prime Minister Narendra Modi today launched a scathing attack on the Congress party and its president Rahul Gandhi over the loan wavier schemes and said that while his government sees the farmers as Anndata for others there were just vote banks.

Addressing the people at Chiyanki Airport grounds after laying foundation scheme for a total of six projects worth Rs 3682.06 crore including completion of pending works of the North Koyel (Mandal Dam) project he said that some people in the name of loan waivers were speaking lies and misleading the farmers.

Taking potshots at Mr Gandhi he said he would have never listened to the name of North Koyel Project. “ They even do not know whether the North Koyel project is the name of dam river or a bird,” he said adding that when in the power their government never thought about the implementation of any of the pending irrigation projects. He said that the North Koyel project remained pending for 47 years which is almost half the decade.

He asked the people that whether such people should get punishment or not or whether Modi should fight against such people or not...Whether Chowkidaar should work or not he asked the people drawing huge applause from them. The Prime Minister said that the almost five-decade delay in implementation of the pending Mandal Dam project is a reflection of how the country moved and how injustice was made to the people of Jharkhand and Bihar. He said that the difference between the present government and the previous government is that for us the farmers were Anndatta while for them they were just vote banks.

He said that the foundation laying for the pending Mandal Dam project was not a small thing as even during the days of unified Bihar when their government was in power they were not sensitive towards the people and realise the pains of the farmers. He said that water war was going on between the states in the country and matter wad also in the supreme court while on other hand due to lack of management water was flowing in the sea and accused the parties of fighting for their vested political interests.

The Prime Minister congratulated both Chief Ministers Nitish Kumar of Bihar and Raghubar Das of Jharkhand and the MPs of both the states who had worked together to solve the issue. He said that their efforts have added new strength to the federal structure of the nation and the work done by these two states is an example which should be followed by the other states too.

Mr Modi said that the farmers would not have been forced to take loans if the irrigation projects had been completed and it was their failure which made the farmers take loans and now politics is being done. He said that after assuming office he was astonished by the acts of the previous governments as at some places only dams were built while at some only canals and even at some places were no work was done and projects remained on papers. He said that after taking over he made a list of such pending projects and made provisions in the budget and now Rs 90000 crore is being spent on completing 99 such big projects which were pending for the last 30-40 years.

The Prime Minister said that it was easier for him to indulge in politics and make farmers their vote banks. He said that he could have announced a loan waiver of about Rs 1 lakh crore by which problems of one generation of farmers would have been over but by spending the amount on completing the pending irrigation projects at least 25 generations of the farmers would be benefitted. He said that he was more interested in the empowerment of the farmers rather than making them vote bank.

Continuing his attack on the opposition he said that to win elections farmers were forced to take loans, youth without jobs and insecurity was created among women and girls but the country should be run by the strength of the people and not weaknesses. He said that the changes in the lives of farmers cannot be witnessed by sitting in the AC rooms or by newspaper headlines. Mr Modi said that it was part of his religion to work for the betterment of the farmers of the nation and create a new system for them right from the farms to market and pointed that while the previous governments worked on Naam he was more worried on Kaam.