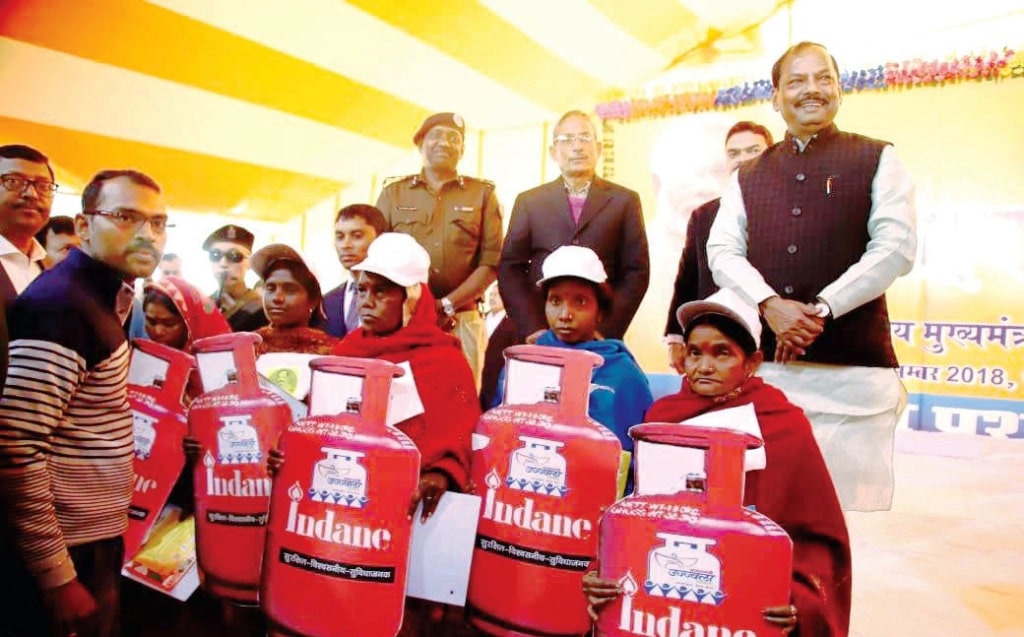 Jamtara: Jharkhand Chief Minister Raghubar Das said that women are the axis of their families and going forward it is around them the progress of the society and state would be centred as when they would prosper than only the country and the state will move
forward. Addressing the people during the Jan Chaupal Programme organised at Bena village under Seharpura panchayat of this district he said that his government has focussed towards the economic empowerment of the women after which property in their
name was being registered at just Re 1 and so far 1.20 lakh women have been benefitted by this scheme.

He said that under the Ujjwala Yojana Jharkhand was the only state which was providing a free gas stove and first refill of cylinders. He said that 40 lakh students in the state have to be given two dress in a year so the women self help groups will now make 80 lakh dresses. He said that the growth rate of agriculture in the year 2014 was minus 4.5 percent which in the last four years has increased to 14 percent for which the farmers of the state should be given credit. Mr Das said that his government had sent a group of 52 farmers to Israel including those from Jamtara to learn the modern techniques of farming and in future 50 men and 50 female farmers would be sent to Israel and Philippines.

The Chief Minister said that every drop of the rain has to be harvested so that the production is more. He said that in European countries there was a huge demand of organic agriculture products and asked the farmers not to worry for the market of their crops as the government will provide them with market facilities. He asked the people to remove the middlemen from farming and other agriculture activities. He said that the state government will strongly deal with cybercrime taking place in the area and time has come when youth needed to give up the shortcut to earn money and instead come forward in dairy for which they would be
provided loans and subsidies as dairy has a tremendous scope of growth in the state.

He said that the milk produced will be purchased by the federation. He said that in the entire district poultry federation would be formed which would be provided Rs 4 lakh at the district level. Mr Das said that people of the state can only be happy when all of them have jobs and poverty in the state would be removed by the cooperation of the people. He said that due to instability in the state the dreams of the people could not be realised however they have voted for a stable government in 2014 under which in the last four years the state has made progress in every field.

He said that the government had set aside a sum of Rs 700 crore in the budget for making the youth skilled and said that in his recent visit to Dubai he found that there was a huge demand for skilled electricians plumbers etc and the government is working to create job opportunities in those nations. He said that in the next budget the pension for widows, old age and divyang would be increased from Rs 600 to Rs 1000. He said that after 67 years of Independence first time Prime Minister Narendra Modi gave health insurance cover of Rs 5 lakh to the people and in Jharkhand by paying a sum of Rs 400 crore out of 68 lakh families 57 lakh families have been covered under the Ayushman Bharat Yojana.

Mr Das said that from January 1 Mukhyamantri Sukanya Yojana would be launched in the state under which money would be deposited in the account of the girl child at the time of her birth and subsequently in different stages till class 11th and if the girl remains unmarried till 18 years she would be given more incentives.