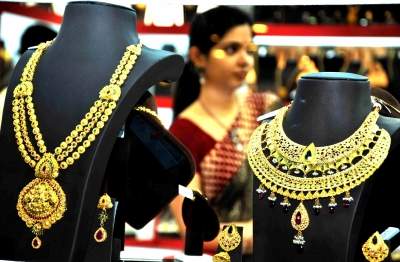 New Delhi (IANS) As gold prices in Delhi crossed the Rs 50,000 mark for 10 grams, driving this surge is the frenzy in the gold trading markets in London, New York and Switzerland as record demands for delivery of gold are coming, unprecedented in recent times.

In a blog, Ronan Manly, precious metals analyst with BullionStar has flagged some of the unsual going ons in the London and New York markets.

There have been large trading losses at bullion banks, for example HSBC, Manly said. The gold borrowing rates have been rising, bullion banks are scrambling to secure physical gold to send to New York, there have been sharp drops in COMEX gold futures open interest (OI), huge volumes of gold bar exports from Switzerland to New York, record gold inventory build-ups in COMEX approved vaults and record numbers of COMEX gold contracts moving to delivery (June and April).

Trend watcher Ritesh Jain said in a tweet, "Something which has not happened in the history A stunning 2.8 M oz of gold was marked for delivery in last month contract... equating 88 tonnes worth $4-5B. Somebody is really taking a big call that USD will be devalued significantly."

Jain has pointed out that the huge gold delivery is linked to a potential weakness on the anvil in the US dollar.

Manly said the COMEX 100 oz gold futures contract, along with the London OTC gold market, between them have a near monopoly on gold price discovery, and are the playground of the LBMA bullion banks such as JP Morgan, HSBC, Scotia, and Goldman Sachs which dominate and control both venues.

On the Comex, while the April deliveries of 31,666 contracts were unprecedented, that was just a warm up, something which became apparent when the intent for deliveries notices for the June contract started showing up from late May onwards, manly wrote.

On 29 May, first notice day for June deliveries, COMEX released a report showing that short holders had indicated that they were moving an incredible 28,375 contracts for delivery on the first day, which was nearly as many contracts as went through in the whole of April, itself a previous record month.

Manly said from there the contracts intending to deliver just piled, over 7,000 the next day, 6,000 the day after that, to a situation where there are now 52,010 June contracts lined up for delivery.

That's 5,201,000 ozs of gold or 161.7 tonnes. With June Open Interest now at tiny levels, it looks like 5.2 million ozs is now more or less the amounts of gold warrants which will be delivered for June.

With 5,201,000 ozs of gold (161.7 tonnes) involved in these delivery notices, this is interestingly just a few tonnes more than all the gold that was exported from Switzerland to the New York during March and April, i.e. 42.7 tonnes in March and 110.6 tonnes in April, for a combined 153.3 tonnes.

Experts say the rally in gold prices is primarily on account of new COVID cases globally. This in turn has dented hope of a quick global economic recovery and US Fed's comment on bleak employment outlook in the US.

The rupee depreciating against the US dollar is also helping rally in gold prices in India. "Gold prices have rallied over 15 per cent (YTD) and nearly 25 per cent up in the last 1 year. Expect gold to remain in focus till clarity emerges on a vaccine and new cases are under control," Nish Bhatt, Founder & CEO, Millwood Kane International said.