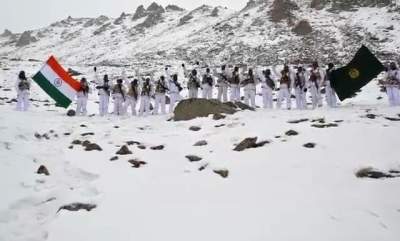 New Delhi (IANS) India overwhelmingly trusts Prime Minister Narendra Modi to handle China, which is now a bigger enemy than Pakistan, and the country thirsts for revenge against the attack on Indian soldiers in Ladakh on June 15, according to the latest IANS CVoter Snap Poll.

The poll, conducted just days after the incidents in Ladakh, gives a very sharp barometer of the country's mood. Modi enjoys high level of trust, but the fundamental change is now that China is considered a bigger enemy than Pakistan.

Former Defence Minister George Fernandes had flagged the China threat many a time, but at that point of time it had not become a dominant national discourse.

However, the country wants retribution against China and is seeking suitable revenge but does not feel that suitable steps have been taken against China. Not just Opposition voters, but even BJP voters want a suitable reply to China and the public mood is against normalising business or trade ties with China.

Yashwant Deshmukh, Founder-Director, CVoter International, said, "The question has gone beyond trustworthiness. The nation supports PM Modi but there is a fundamental shift that now China is seen as a bigger enemy. However, the public mood wants a befitting reply to China."

China is now clearly problem number 1 for India. As per the snap poll, 68.3 per cent say China is a bigger problem for India than Pakistan, while only 31.7 per cent see Pakistan as a bigger threat.

The public is still waiting for retribution against China. More than 60 per cent feel that China has not got a befitting reply and a minority of 39.8 per cent feels that Indian government has given a suitable reply.

There has been an ongoing spat between the government/BJP and the Congress on the escalation on the China border.

The snap poll had a question on whether as a protest to China, the common people of India will stop buying Chinese products, i.e., mobile phones, TV, electronics that are made in China. The answer is that 68.2 per cent people said they will boycott Chinese goods but a sizeable number of 31.8 per cent said nothing of this sort will happen and people will continue to buy Chinese goods.