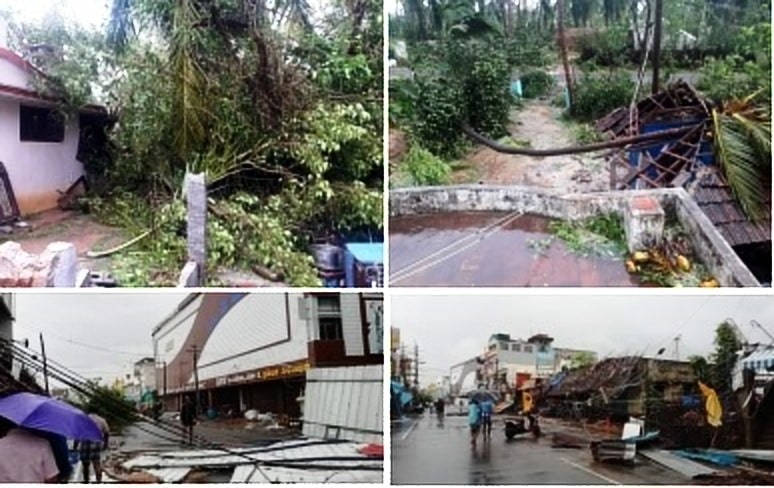 Pudukkottai: A view after Gaja cyclone hits Tamil Nadu's Pudukkottai district, on Nov 16, 2018. A severe cyclonic storm, Gaja, battered the Tamil Nadu coast, leaving at least 11 people dead and causing widespread destruction. the cyclone crossed the coast between Nagapattinam and Vedaranyam districts between 12.30 a.m. and 2.30 a.m. with wind speeds of about 110-120 kmph.(Photo: IANS)

Authorities said the cyclone crossed the coast between Nagapattinam and Vedaranyam districts between 12.30 a.m. and 2.30 a.m. with wind speeds of about 110-120 kmph.

So powerful were the gales that the roof sheets of the Nagapattinam railway station were damaged.

Chief Minister K. Palaniswami said in Salem, some 350 km from here, that 11 persons had lost their lives due to the cyclone.

About 82,000 people living in low-lying areas were sent to 471 relief centres, the Chief Minister said, adding that the preventive measures helped keep the death toll low.

Relief centres were set up in Cuddalore, Nagapattinam, Ramanathapuram, Thanjavur, Pudukottai and Thiruvarur on Thursday itself.

R.B. Udhyakumar, Minister for Revenue and Disaster Management, said all the trees felled by the cyclone were being removed.

Road traffic was hit in Nagapattinam due to the fallen trees.

The government snapped power supply on Thursday night as precaution. The cyclone damaged some 12,000 power poles.

Several universities in Tamil Nadu have postponed their exams slated for Friday.

Similarly, schools will remain closed on Friday in Nagapattinam, Cuddalore, Thanjavur, Pudukottai, Thiruvarur and several other districts in Tamil Nadu and in Puducherry including Karaikal.

According to the Chief Minister, the Fisheries Department will estimate the damage to the fishing boats before paying compensation to the fishermen.