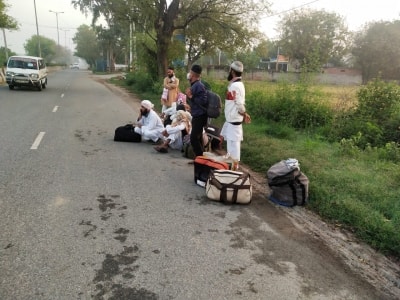 New Delhi (IANS) The government on Friday asked all the states and Union Territories to conduct coronavirus screening of Rohingya Muslim refugees who attended the religious congregations of the Tablighi Jamaat.

Official sources told IANS that the Union Home Ministry issued the direction after intelligence agencies reported to the government that Rohingyas living in camps at various places had attended the religious congregations of the Tablighi Jamaat, the Islamic missionary which became a super-spreader' of the Covid-19 infection in the country.

Rohingya Muslims who attended the congregation and their contacts may have contracted Covid-19, the Centre has conveyed to the state governments.

As per the intelligence reports, the Rohingyas residing in camps in Hyderabad and other parts of Telangana had attended the Tablighi Jamaat 'Ijtema' at Mewat in Haryana and then visited the Markaz at Nizamuddin in New Delhi where 1,306 foreigners from 41 countries attended the congregation on March 13.

The event led to a sudden spike in coronavirus cases with many of them getting traced to the congregation.

Sources said the agencies also reported to the top brass of the government that a group of Rohingyas living in Shram Vihar near Shaheen Bagh -- one of the major sites for the anti-Citizenship Amendment Act (CAA) protests -- in the national capital also joined the Tablighi Jamaat activities last month.

The Shaheen Bagh Rohingyas have not returned to their camps after attending the Tablighi events, sources said.

Some of the Rohingyas are learnt to have visited the Derabassi area in Punjab and Jammu after attending Tablighi activities in the national capital.

The Home Ministry instructed the states to pursue the investigations on priority so that all the Rohingya Muslims and their contacts could be quarantined on time if they are found positive with the deadly disease which has claimed 452 lives while the number of active cases has gone beyond the 11,500-mark across the country.

The Rohingyas and their contacts across the country, sources said, will be screened for coronavirus.

The Delhi Police have registered a case against seven people, including Tablighi Jamaat Markaz chief Mohammad Saad, under stringent sections for culpable homicide not amounting to murder on March 31 after the Tablighi group was found to be violating lockdown norms.

They have also been booked for violation of the Epidemic Diseases Act and the Disaster Management Act.

The Ministry of Home Affairs on April 2 blacklisted 960 foreigners and cancelled their visas and began its efforts to identify the contacts of over 9,000 identified Tabligi Jamaat workers who have been to the Tablighi Jamaat headquarters in Delhi's Nizamuddin area.

As over 22,500 Tablighi Jamaat members and their contacts were identified across the country till last week, the states and the UTs have now been tasked to trace the Rohingya Muslims refugees who attended the Tablighi events.

The Rohingya Muslims were forcibly displaced from the Rakhine state in Myanmar to the neighboring Bangladesh in the past two decades.

Over 40,000 of them entered into India through Bangladesh and have been living in refugee camps in several states, primarily in Jammu, Assam and West Bengal. The BJP government has called them illegal immigrants and has decided to deport them from India.