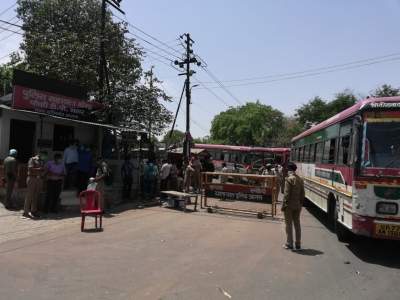 Jaipur (IANS) The Rajasthan government has finally decided to send thousands of Kota students back home as its Uttar Pradesh counterpart has arranged 200 buses with both Gehlot and Yogi government reaching a consensus amid the worst human crisis.

A comprehensive meeting has been called by Chief Minister Ashok Gehlot to chalk out an elaborative plan -- from where the students need to board the bus and what all stuff needs to be sent along with them, confirmed officials.

Speaking to IANS, Hariom Gurjar, PRO, Kota said:, "The Rajasthan and UP government have both given their consensus on students' movement and hence we are all set to send students back home, however, there are many issues which we need to sort out and therefore, the CM himself has called a meeting with officials through video conference to avoid any Mumbai-like incident. The meeting is on as of now," he said.

"Students are spread around different areas of the city and hence we are planning where should the buses be parked so that there is no chaos and social distancing is maintained.

"Also health department has been asked to send two doctors along in each bus."

On of the top IIT coaching institute, Allen spokesperson Nitesh Sharma told IANS that district administration has asked them to make a list district-wise and zone-wise list based on students' native place.

"We are expecting buses to reach here by evening," he said.

District collectorate officials said that coaching institutes have been asked to make all necessary preparations in this context.

The stranded students in Kota who were preparing for different entrance examinations were running a Twitter campaign #sendusbackhome since the last two days.

Earlier, the state government had okayed their proposal to send them back home, however, Bihar government refused their entry in their native state due to which the proposal was withdrawn.

ADM Agra told IANS that 200 buses have been arranged by the Yogi Adityanath government while 100 buses are ready in Kota. Each bus shall have 25 students with two policemen.

Mask and sanitisers are being given to students, he added.