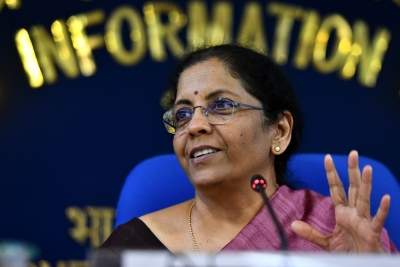 New Delhi (IANS) The government may come out with another big package to address the demand and supply side issues facing the country, but its contours and timing of the announcement is yet to be worked out, senior government officials privy to the development said.

They added that the next economic stimulus package would be bigger than the Rs 1,70,000 crore worth of schemes announced by Finance Minister Nirmala Sitharaman last month focusing on providing food security to the poor and providing money in their hands to fight the Covid-19.

"The finance ministry is regularly interacting with various economic ministries and getting inputs from them over measures that would be required to give stimulus to the economy in this difficult period. These could be further discussed to finalise a concrete plan once the situation of lockdown becomes a bit clearer. In a lockdown many of the measures that the government announced may not yield desired results," the officials quoted earlier said.

The next set of stimulus may focus on concerns of India Inc. and the SME segments, and in particular a relief package for the travel and aviation sectors bearing the maximum brunt of present lockdown. Also, demand side measures could look at tax breaks for taxpayers and relief from duty on major items of consumption. Also, measures to provide more strength to the capital market may also be considered.

There is also a suggestion to involve five to six big corporate houses in the production of key items of consumption for the masses so that the country did not face shortages once demand picked up. This could be done by providing direct linkages of farmers with corporate entities so that key food produce reaches the factories for processing and production.

India Inc has been waiting for a package that would address some of the immediate problems and provide to sectors bearing the maximum brunt. Among the suggestions include withdrawal of LTCG temporarily, remove buyback tax while defer payment of corporate tax. The industry has also suggested that timelines for qualifying delays in loan repayment as NPAs should also be extended.

"While lockdown measures seem to be working in reducing the spread of the Covid-19 pandemic globally, the associated loss of income for a large section of the society in India could hurt consumer spends. There is a broad-based expectation from the Indian government to look at additional fiscal measures to counter the effect of the likely slowdown in the economy," Kotak institutional equities said in report on consumer spend.

While announcing the last package, Sitharaman had indicated that concerns of the India Inc. and SME segments and other segments of the economy impacted by the present lockdown may be looked at and government will come up with a plan later.

"Our first priority is to reach food to the poor and reach money in their hand. We will think about other things later," Sitharaman had said then.

To a specific question on relief for travel and aviation sectors bearing the maximum brunt of present lockdown, the finance minister said : "we will come back when something is ready."

There was meeting of the officials of various ministries on Sunday where the possibility of redesigning some welfare and other government schemes was also discussed. The plan is to tailor-made schemes to suit the post-lockdown situation.

One of the group of senior bureaucrats constituted by the prime minister to prepare India's response to COVID-19, is specially tasked to finalise a set of economic measures needed to help the economy stand on its feet post lockdown.

The next package would be third in line by the government that has already relaxed a lot of compliance related issues and provided a package for the list vulnerable sections of the society.